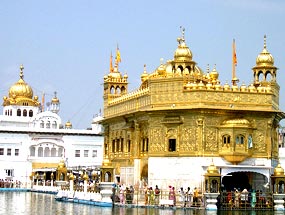 Golden Temple is counted amongst the most revered pilgrimages of the Sikhs in India. It is located in the Amritsar, one of the most developed cities of Punjab. Sikh devotees from different parts of the country come to Amritsar to offer their prayers at the Golden Temple, which is officially known by the name of Harmandir Sahib. The term 'Harmandir Sahib' has been derived from two words, Hari meaning 'God' and Mandir meaning 'Temple'. Thus, Harmandir literally means the 'Temple of God'.

The site where the gurdwara now stands was once the venue of a temple, surrounded by a small lake and a thin forest. The nearby town of Goindval served as the residence of the third Sikh Guru, Guru Amar Das. The great Mughal Emperor Akbar used to come to the town to visit the Guru. He got so much impressed by the way of life in the town that he allocated the revenues of several villages lying in the surroundings to the Guru's daughter, Bhani, as a gift on her marriage to Bhai Jetha.

Bhai Jetha went on to become the fourth Guru of the Sikhs and came to be known as Guru Ram Das. He enlarged the lake surrounding the temple and even constructed a small township around it. The town initially came to be known as 'Guru Ka Chak', 'Chak Ram Das' or 'Ram Das Pura'. However, the full-fledged town of Amritsar was developed under the leadership of the fifth Guru, Guru Arjan Dev. Hazrat Mian Mir, a great Sufi saint of Lahore and a friend of Guru Arjan Dev Ji, laid the foundation stone of Golden Temple in December 1588.

It took approximately 13 years to construct the monument and it was completely ready and 1601. The Afghans, under the rule of Ahmed Shah Abdali, attacked Golden temple and inflicted great damages on it. Owing to this destruction, the gurdwara had to be substantially rebuilt during the 1760s. The gurdwara is situated in the middle of a small lake, which is known as the 'Sarovar'. The devotees believe that the water of the lake has curative powers and call it as Amrit (The Holy Water).

One can enter the gurdwara complex through any of its four entrances. The four entrances of Golden Temple are suggestive of the importance of acceptance and openness in relation to human beings. There is no restriction on people for entering the gurdwara. People of any religion, color, creed or sex can enter Harimandir Sahib. The only restraint that has been applied is that a person must not drink alcohol, eat meat, smoke cigarettes or consume any drugs while inside the premises of the shrine.

Just like in any other gurdwara, people entering the Golden Temple have to cover their heads as a sign of respect. They are also required to wash their feet in the small pool of water before entering the sanctum sanctorum. Built on a 67 sq ft. square platform, Harmandir Sahib covers an area of 40.5 sq ft. At the end of the walkway is Darshani Deori (an arch), with a doorframe that is approximately 10 ft in height and 8ft 6in in breadth. The door panes are adorned with artistic style and lead to the ramp taking to the main building.

13 feet wide 'Pardakshna' (circumambulatory path) runs around the main shrine and leads to the 'Har ki Paudi' (steps of God). The main building of Golden Temple has three stories, with their front facing the bridge. The central hall is small square room with three entrances. A recitation of Guru Granth Sahib is held here on a regular basis. Just above this room is the low fluted dome, adorned with lotus petal motif. On the top of it is an inverted lotus, the 'Kalash' with a beautiful 'Chhatri'.

Golden Temple is festooned with decorative gilding and marble work, which date back to the 1800s. The magnificent gold work and marble work was done under the reign of Ranjit Singh, the Maharaja of the Sikh Kingdom of Punjab. The architecture of the gurdwara represents an exceptional harmony between the Muslim and the Hindu architectural styles. Infact, it is said that the architecture of Harmandir Sahib has created an independent Sikh school of architecture in the Indian subcontinent.

After Operation Black Thunder of 1988, Government acquired a narrow peripheral strip of land surrounding the gurdwara. This was done for the purpose of creating a security belt. This led to displacement of a large number of people and as a result, large scale protests. The project was discontinued at that time and was revived only in 1993 by the Deputy Commissioner Karan Bir Singh Sidhu. He changed the concept of the periphery, from that of a security belt to that of a second parikarma.

A serene landscape, fully consistent with the beauty of the Golden Temple, was also created. The pilgrims visiting the Golden Temple can only travel by foot in the Galliara, vehicles are not permitted. On 6th July 2005, the SGPC (Shiromani Gurdwara Parbandhak Committee) decided to install closed circuit television cameras around the Harmandir Complex for security purposes.