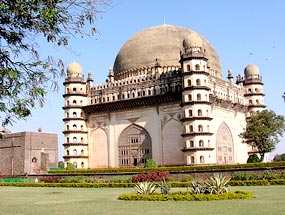 Gol Gumbaz is a mausoleum, situated in the Bijapur city of Karnataka. It serves as the last resting place of the seventh ruler of the Adil Shahi dynasty, Muhammad Adil Shah. One of the most magnificent structures built by the erstwhile Adil Shahi rulers, Gol Gumbaz today counts amongst the major tourist attractions of Bijapur. The mausoleum has been built as per the Islamic architectural style, which is found in India in general and the Deccan region in particular.

Almost all the hallmarks of the traditional Islamic or Persian style of architecture are reflected in the architecture of Gol Gumbaz. These include a dome, different types of shapely arches, geometric proportions and use of Islamic motifs. However, one cannot ignore the local influences that are clearly visible. The greatly foliated drum below the globular dome and the use of the local dark brown stone, which was a characteristic trait of the Bijapur buildings of that period, serve as a proof of the local influences.

Gol Gumbaz dates back to the year 1656 and was built by Muhammad Adil Shah in his own lifetime. One of the most impressive monuments in Bijapur, the mausoleum is an enormous cube, which is adorned with octagonal seven storied towers. Crowning the towers are small rounded domes that are seen projecting at the corners. Each face of the Gol Gumbaz is flanked by three arches, with the central arch being huge in size. Bordering the central arch are two arches that are smaller in size.

The entrance to the arch has been inscribed with a few lines, which declare that the structure houses the mortal remains of Muhammad Adil Shah. There is a projection on the tomb walls is aligned with the sixth story of the corner towers. The projection is backed by closely set brackets, which are topped by a band of small arched openings. The ramparts of the mausoleum have an ornamental binding, looming beyond which is the spherical dome. The dome is huge, with an internal diameter of 125 feet and its apex being 200 feet high.

It is built in the typical Bijapur style and has a foliated drum. Instead of a pier, the dome of Gol Gumbaz has a pillar. The crescent finial that prevails over the spires illustrates the Turkish origin of the ruler. The interiors of the monument have a single square chamber of grandiose magnitude. Each side of the chamber is 135 feet high, with the walls being over 10 feet thick and 110 feet high. The ornamentations of the mausoleum have been incorporated in the construction in such a way that they reflect an unusual feature of simple grandeur.

Eight pointed intersected arches have been constructed for sustaining the colossal dome over the square room. The arches are perfectly stable and are capable of contracting any impetus from the weight of the dome. On the top of the arches is a circular platform, which comes into contact with the base of the dome. An octagon was produced at the intersection between the square chamber and circular base of the dome to ensure an easy and transition from one to the other.