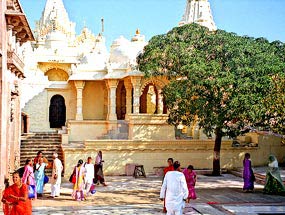 Location: Palitana, near Bhavnagar (Gujarat)
Number of Temples: 863
Founded In: 11th to 12th century (initially) and 16th century (the present ones)
Dedicated To: Jain Tirthankaras

The ancient city of Palitana is situated in Gujarat, at a distance of approximately 51 km to the southwest of Bhavnagar. Known for its amazing Jain temples, the city forms a part of the Saurashtra region. Palitana Jain temples are believed to be the largest cluster of Jain temples in the whole of India. There are a total of 863 temples in the city, which are found spreading from base of the Shatrunjaya hill to its peak. You will have to climb almost 3950 steps, spanning 3.5 km, to reach the Jain temples of Palitana.

All these temples do not date back to the same time. Rather, there were built in two different phases, with the first one starting from the 11the century and ending somewhere in the 12th century. This period also served as the revival time of the temple architecture all over India. The second phase started from the 16th century onwards. The reason for the two different phases is that Muslim invaders destroyed the temples, which were built in the 11th century, during the 14th and 15th century.

Thus, the temples were rebuilt in the 16th century and it is these reconstructed temples that we see today. There is no single person who can be credited with the construction of the Palitana Jain Temples. In effect, these temples reflect the effort and devotion of the wealthy Jain followers. With time, the successive followers of the Jain community started designing their own temples. They cleared the ridge of the hill for the purpose, leveled it into terraces, built the temples and walled them, covering a large area in the process.

Almost all the Palitana Jain Temples have been constructed on a common plinth. With each successive temple, the spire above the ceiling goes higher, giving the look of rising mountain peaks. The spires of the Jain Temples at Palitana have been beautifully festooned and sculpted with geometrical and floral ornamentation. The marble used for making the spires was brought from Rajasthan and then, block-by-block, it was taken uphill and the carvings were done on the site.

However, the architects as well as artisans working on the temples had to come down from the sacred hill before sun down every day, but were allowed to work in the rains. A number of the smaller temples at Palitana have chief walls built of white plaster, while the marble has been used for domes and spires. All the temples are dedicated to the Jain Tirthankaras and are believed to be one of the most sacred Jain pilgrim destinations in India. Nobody is allowed to visit the temples after dusk, not even the priests.

The temples are surrounded by strong walls and have been grouped into nine enclosures. Each of the enclosures has a central temple in the middle, which is surrounded by a number of minor temples. One of the most significant temples of the group is the Chaumukh Temple, which enshrines a four-faced deity of Adinathji. The deity has been placed on a marble pedestal and the shrine is open on all the four sides. The temple dates back to the early 17th century and stands divided into smaller structures, each of them crowned by a dome.

The structures that fall the innermost form a cross and are symbolical of the five hills sacred to the Jains. The most magnificent as well as the most profusely decorated Jain temple at Palitana is the Adishwar Temple. The ornate pillars and roofs of the temple are adorned with delicately cut marble, in the shape of dragons. Other significant Jain Temples of Palitana include Sampriti Raja Temple, Kumarpal Temple, and Rampal Temple. One must also visit the Muslim shrine of Angar Pir situated near the Adishwar temple.