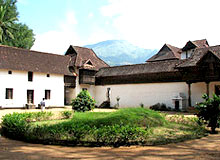 Location: Near Thiruvananthapuram, Kerala
Founded By: Iravi Iravi Varma Kulasekhara Perumal
Founded In: 1601
Timings: 9:00 am to 4:30 pm
Best to Visit: November to May

Padmanabhapuram Palace is a beautiful monument, situated in a small village near Thiruvananthapuram, the capital city of Kerala. The distance between the two places is approximately 65 km. The palace is situated inside an old granite fortress, which is around four km in length. It was constructed somewhere around 1601 AD, under the patronage of Iravi Iravi Varma Kulasekhara Perumal, the erstwhile ruler of Travancore.

The capital of Travancore got shifted from here to Trivandrum in the 18th century. Located at the foot of the Veli Hills, Padmanabhapuram Palace serves as the perfect example of traditional Kerala architecture. With the river Valli flowing nearby, it presents a picturesque sight. There are a number of structures, including a sprawling courtyard, which make up the entire complex of the Padmanabhapuram Palace of India.

Mantrasala (King's Council Chamber)
Mantrasala, or the King's Council Chamber, is the place where the king used to hold consultations with his ministers. It is a magnificent structure, adorned with colored mica windows and exquisite latticework. The flooring of the chamber is also very tastefully done in dark color and has a perfect finish. It has been constructed with a mixture of diverse stuff, like burnt coconut shells, egg white, etc.

Thai Kottaram (Mother's Palace)
Thai Kottaram, also known as the Mother's Palace, dates back to the mid-16th century. It has been deigned as per traditional Kerala architectural style and is believed to be the oldest structure in the entire palace. There is an inner courtyard, called 'nalukettu', with sloping roofs and four pillars that seem to be supporting it.

Nataksala (Hall of Performance)
Nataksala is the place where dance performances used to take place. The hall was built under the aegis of Maharaja Swathi Thirunal, the erstwhile ruler of Travancore. It is also known as the Hall of Performance and has solid granite pillars and gleaming black floor. The wooden enclosure of the hall has peepholes, which were used by the royal ladies to watch the performances.

Central Building
The central building of Padmanabhapuram Palace is a four-storied structure, situated in the heart of the palace. The top floor of the building, known as Upparikka Malika, used to serve as the private worship chamber of the royals. The walls of the top floor have been ornamented with exquisite murals that date back to the 18th century. Most of these murals exhibit scenes from the puranas, while some depict the social life of the Travancore during that time.

Just below the worship chambers are a number of rooms, one amongst which was once the bedroom of the King. The ornate bedstead of the ruler can still be seen there. It was received as a gift from the Dutch merchants and is composed of 64 types of herbal and medicinal woods. Almost all the rooms of this building have built-in recesses in walls, which were used for storing weapons like swords and daggers.

Thekee Kottaram (Southern Palace)
Thekee Kottaram is the name given to the southern palace, which is believed to be as ancient as the Thai Kottaram. Presently, it has been converted into a heritage museum, where one can see antique household articles and curios being displayed.