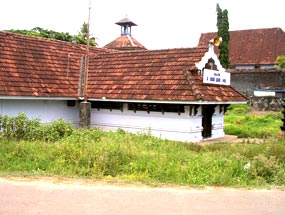 Dutch Palace is situated in Mattancherry, at a distance of approximately 10 km from Ernakulam. The palace was originally built by the Portuguese, who later gifted it to Veera Kerala Varma, the Maharaja of Kochi. Initially the palace was known as the Mattancherry Palace of Cochin. However, after the Dutch renovated it in the year 1663, it came to be known as the Dutch Palace of Kochi. Presently, the palace has been converted into a museum, where one can find paintings and murals signifying the rich tradition of the Hindus.

Dutch Palace also houses a rich compilation of the paintings and portraits of the Maharajas of Cochin. The beautiful frescoes of the palace correctly represent the Hindu temple art. The medieval charm associated with the Mattancherry Palace of Kochi definitely adds to its mystical appeal. One can find domination of the Portuguese style of architecture in the design of the palace. The entrance of the Dutch Palace is flanked by two beautiful arches, which lets one enter into its compound, a feature quite characteristic of the Portuguese style.

One thing that makes Mattancherry Palace distinct from the other palaces of Kerala is that even though it has been designed as per Portugal style, the pattern reflects traditional style of the state. Nalukettu style has been followed in the construction of the palace. In accordance with this style, there are total two stories inside the complex, which has been built around a central courtyard. Giving the Dutch Palace a European look are round-headed windows and doors, along with the typical sloping tiled roof.

The interiors of the palace reflect much gracefulness and have been beautifully decorated. The walls of the Mattancherry Palace have been adorned with large paintings as well as exquisite murals. Inside the premises of the palace, one can find two gorgeous temples. One of these temples is dedicated to Lord Krishna, while the other is dedicated to Lord Shiva. The rich collection displayed inside the Dutch Palace of India includes royal headdresses, weapons, furniture, royal robes, palanquins and other items used by the royal family.

The painting collection of the palace illustrates scenes from Great Indian Epics like Ramayana and Mahabharata, apart from the sacred Puranas. Almost all the paintings are ancient, with most of them dating back to the 16th century. These paintings are huge in size and have been spread over an area that measures almost 1000 sq ft. Even the flooring of the Dutch Palace of Kochi is quite unusual. Though it looks like polished black granite, it is actually made of a mixture of charcoal, burnt coconut shells, lime, plant juices and egg whites.