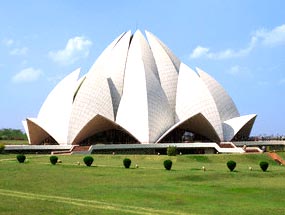 Lotus Temple of Delhi is an architectural wonder, which is not dedicated to any particular God. It is situated in the Kalkaji area of South Delhi. The temple has been built in the shape of a lotus, thus the name 'Lotus Temple'. It is made up of marble, cement, dolomite and sand and is also known by the name of Bahai Temple. No single faith dominates this temple and there is no religious restrictions have been placed for entering its premises. People come here, not for worship, but for meditating and to feel at peace with themselves.

Built as per the modern architectural style, Lotus Temple of India represents serenity, harmony, tranquility and calm. People from all races, religious backgrounds and cultures visit the Lotus temple to feel one with nature as well as the fellow humans. The temple represents Bahai faith, an independent world religion. This religion is based on the principles of humanity and compassion, is broad in its outlook and scientific in its method. The youngest religion of the world, the Bahai Faith believes in one single race i.e., humanity.

While building the Bahai Temple of Delhi, the architects made use of traditional means of construction, along with Western engineering designs. It took approximately 10 years and about 800 engineers, technicians, artisans and workers to construct this amazing piece of architecture. Fariborz Sahba, a Canadian architect of Iranian origin, was the main person behind the design as well as management of the project. The main aim behind the construction of this temple was to teach people the triviality of material possessions.

The Bahai temple of India is one of the seven temples of Bahai Faith built throughout the world. The structure of the temple comprises of three ranks, each comprising of nine petals. Each of them bounces up from a podium, which raises the building above the surrounding plains. The first two ranks of the petals have been curve inwards and encircle the inner dome. The third layer takes an outward curve in order to form a kind of covering over all the nine entrances of the temple.

The lotus petals have been constructed of reinforced white concrete and are covered with white marble panels. Nine arches, which mainly support the entire edifice, enclose the central hall. The exterior of the Lotus temple comprises of nine reflecting pools, which are built in such a way that they look like the green leaves of the lotus flower. Since there are practically no straight lines in the architecture of the temple, the architect faced great difficulties in designing and erecting the structure.

The construction work of the Bahai Temple was undertaken by the local laborers of Delhi. The temple was inaugurated and opened up to the general public in December 1986. Till date, it has seen the influx of more than 50 million visitors, making it one of the most visited tourist destinations of the world. People come here to understand as well as practice the teachings of the Bahai Faith, which include the presence of a single God, oneness of religions and oneness of mankind.