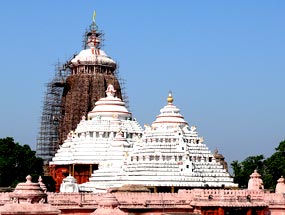 Jagannath Temple of Puri is one of the most revered pilgrim destinations in India. The temple is dedicated to Lord Jagannath (Lord of the Universe), another form of Lord Krishna. One of the most popular attractions of the Jagannath Puri Temple of Orissa is its annual Rath Yatra, a chariot festival in which a procession of the three main temple deities, Lord Jagannath, Lord Balabhadra and Goddess Subhadra, is taken out on ornately bejeweled chariots. The temple is especially sacred to the followers of the Vaishnava traditions.

Some time back, copper plates were discovered from the Ganga dynasty. As per the inscriptions on these plates, Jagannath temple was constructed under the patronage of Anantavarman Chodaganga Dev, the ruler of Kalinga. Especially the Jagamohana and the Vimana portions of the temple date back to the time period when Anantavarman was in power (1078 - 1148). However, the temple assumed its present shape under Ananga Bhima Dev, who got it reconstructed in the year 1174.

Till the year 1558, when the Afghan general Kalapahad attacked Orissa, Lord Jagannath was worshipped in the temple. However, with the arrival of the Afghans, the worship was stopped. It was only when Ramachandra Dev established an independent kingdom at Khurda in Orissa that Jagannath Puri was sanctified and the deities were reinstalled. There is a very interesting legend surrounding this temple and its origin.

It is said that the original image of Lord Jagannath, a deity form of Lord Krishna, was found near a fig tree. It was in the form of Indranila, the Blue Jewel, and was so stunning that Dharma decided to hide it in the earth. In order to procure the image, King Indradyumna of Malwa performed ruthless penances. Pleased by his penance, Lord Vishnu appeared before him and asked him to find a floating log by the Puri seashore. The King found the log and soon, Lord Vishnu and Vishwakarma appeared before him in the form of artistes.

They then prepared the images of Lord Krishna, Balarama and Subhadra from the log. Jagannath Puri Temple is spread over an area of approximately 400,000 square feet. The entire temple complex is surrounded by a high-fortified wall and on the topmost point of the temple is placed the 'Chakra' of Lord Vishnu. The entire complex of Jagannath Puri Temple comprises of atleast 120 temples and shrines. The complex has been built as per Orissan architectural style. Jagannath Temple has a red flag, which conveys whether Lord Jagannath is within the shrine or not.

The main temple, which houses the sanctum sanctorum, is curvilinear in shape and is adorned at the top by the 'Srichakra' (eight-spoke wheel) of Lord Vishnu. There is a huge tower in the temple, built on a raised platform of stone and rising to a height of approximately 214 feet above the inner sanctum. All the shrines, halls and mandaps situated near the main temple have pyramidal roofs that seem to be rising in steps towards the tower, looking just like a ridge of mountain peaks. Apart from a 20 feet high inner wall, another wall also encloses the shrine.

In the front of the main gate is a magnificent sixteen-sided monolithic pillar. There are also two lions statues placed on either side of the gate, which seem to be guarding the shrine. Inside the sanctum sanctorum are the idols of three deities, Lord Jagannath, Lord Balabhadra and Goddess Subhadra. All the idols have been placed on an ornamented platform. Elaborate worship services are held at the Jagannath Puri Temple on a daily basis. Apart from that, the temple also serves as the venue of numerous festivals every year.

The kitchen of the Jagannath Temple of Orissa is believed to be the largest kitchen in the whole of India. Every day, thousands of devotees come to the temple and are given the holy food called "Mahaprasad". The entire temple complex of Jagannath uses the services of over 6000 priests. Along with that, over 14000 people serve as the assistants and attendants of the priests, waiting on the Jagannath deity. Then, we have the numerous pilgrim guides who take devotees on a complete tour of the Jagannath Puri Temple.