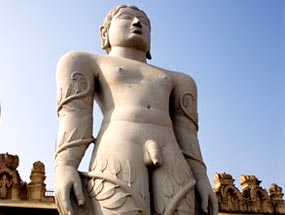 The Monolith of Gommateshwara is situated in Sravanabelgola, one of the most sacred Jain pilgrim centers in India. Considered to be the tallest monolithic sculpture in the world, Gommateswara statue is the pride of Karnataka. It is perched on top of the Indragiri hill and serves as the symbol of the grandeur of the Jain religion. The monolith dates back to the year 980 AD and was constructed by Chavundaraya, a minister and commandant of King Rachamalla of the Ganga dynasty.

Gommateshwara Monolith stands tall at a height of 58 feet. It is constructed entirely out of granite and depicts Jain saint Gommateshwara, also known as Bahubali, without any clothes. The colossal statue is believed to have been carved out of a single rock and can be seen from as far as 25 km. Since it is situated on a hill, one has to climb around 614 steps to reach the statue. The Monolith of Gomateshwara has been built as per the typical Jain architecture and beautifully represents the exquisite craftsmanship of the Indian artisans.

The body of the saint has been sculpted in perfect proportions and one can feel calmness in his face. There is a very interesting story behind the construction of the Gommateshwara statue. Bahubali was one of the two sons of Adinath, the first of the 24 Jain saints (Tirthankars). He was never interested in the material possessions of his life and gave away the entire kingdom of his father to his brother. Renouncing the world, he underwent rigorous penance and was recognized as Gommateshwara.

It is said that Chavundaraya's mother saw a huge statue of Gommateshwara in her dreams. After waking up, she vowed that she would not eat until her dream was converted into reality. Thereafter, Chavundaraya and his mother went on a pilgrimage, in which they came across the two hills at Sravanabelgola already sanctified by the Jains. Chavundaraya decide to build the statue of Gommateshwara on the larger hill and ordered the carving of the monolith out of a boulder that stood on top of the hill. The image was consecrated in 980 AD.

Festival
After every 12 years, during the Mahamastakabhisheka ceremony, the Monolith of Gommateshwara is anointed with tons of coconut milk, jaggery, curd, bananas, milk, poppy seeds, sandalwood, and saffron. Jain pilgrims come here from different parts of the country as well as the world to witness this event.