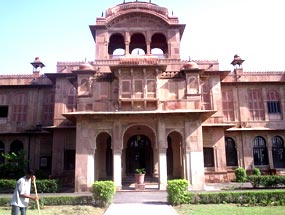 Lalgarh Palace is situated in the Bikaner city of Rajasthan. An architectural beauty, the palace dates back to the year 1902. Maharaja Ganga Singh got the famous Lal Garh Palace of India constructed in the memory of his father, Maharaja Lal Singh. The palace was designed by Sir Swinton Jacob and its architecture represents an amazing fusion of Rajput, Mughal and European architecture. The oriental interiors and amenities of the palace are a complete contrast to its exterior appearance.

Exquisite latticework and filigree work, which adorn the Lalgarh Palace, serve as the perfect example of the exquisite craftsmanship of those times. The palace houses a rich collection of beautiful paintings and hunting trophies of the Maharajas. The blooming terraced gardens of the palace, ornamented with Bougainvillea bushes, further add to its magnificence. One can also see peacocks strolling around the palace, which has now been partly converted into a heritage hotel.

Lalgarh palace also has a library, which is believed to have the largest collection of original Sanskrit manuscripts. The manuscripts have been written on parchments, copper and gold or silver plaques. The museum of the palace is situated in the Ganga Niwas building. It boasts of a unique collection of miniature paintings, manuscripts, weaponry, photographs and albums, along with a bi-plane that dates back to the World War I. A part of the Lalgarh Palace still serves as the residence of the royal family.