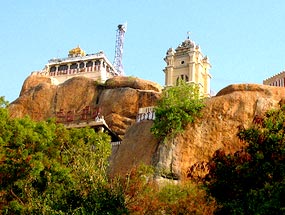 Rock Fort temples are situated in Trichy, a small city in Tamil Nadu. They are counted amongst the most visited pilgrim destinations of the state and stands perched on a hill. The entire Rock Fort temple complex mainly comprises of three temples, namely the Manikka Vinayaka Temple, the Uchhi Pillayar Koyil and the Taayumaanava Koyil (Shivastalam). The stone hill on which the temple complex is sited seems to be rising brusquely from the plains, to tower over the nearby city. The entire complex rises to a height of approximately 83 meters.

The most famous landmark of Tiruchirapalli, the Rockfort temple complex is believed to be older than even the rocks of Greenland and the Himalayas. The hall of the temple is adorned with 100 pillars and its Vimana is enclosed in a gold cover. The southern side of the rock, on which the Rock Fort temples stand, has exquisite rock-cut cave temples. These caves are believed to have been carved at the time of the Pallavas and are adorned with exceptionally magnificent sculptures.

The temple has also been the venue of the Carnatic wars fought during the British-French conflict, in the 18th century. The founders of the city of Tiruchirapalli, the Nayaks, got the Rockfort Temple built. The main deity of the Shivastalam temple is Kangaala Moorthy, one of the 64 manifestations of Lord Shiva. The temple is entered through a flight of covered stairs and the first site that one encounters on entering the temple is that of two more temples. The Tayumanavar temple is situated to the west of the entrance and the Uchipillayar temple to its east.

Six worship services are offered at the temple on a daily basis. The Uchhi Pillayar Koyil temple enshrines the image of Lord Vinayaka and one can have breathtaking views of the environs from this temple. Rock Fort temple complex also houses the house of Robert Clive as well as an 18th century Church, built by Reverend Schwartz of Denmark. The pinnacle of the complex is reached through a flight of 344 steps. The inscriptions at the top are said to date back to 3rd century BC. Even though, the surrounding walls of the temple are now in ruins, the main guard gate is still intact.

Festivals
Brahmotsavam festival is celebrated every year at the Rock Fort Temple, during the months of April-May. The venue of the festival is the Chittira Mandapam, which houses granite chain with nine loops. Then, we have the Aadi Pooram and the float festival in Panguni that attract tourists. Mohini Alangaram, Vaikunta Ekadasi, Garuda Seva, Flower Festival and the Car Festival are the other major festivals celebrated near the temple.