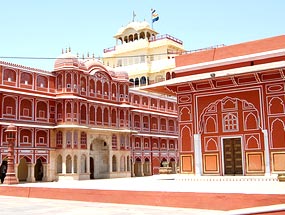 City Palace of Jaipur is one of the major landmarks of the state of Rajasthan. A magnificent structure, the palace was built under the patronage of Maharaja Sawai Jai Singh. It still houses the royal family of Jaipur, which stays in the Chandra Mahal Palace situated inside the complex. Only the ground floor of the City Palace is open for public viewing. The entire palace complex comprises of a number of gardens, courtyards and buildings. Raja Jai Singh was the one who initially built the outer wall of the palace.

Succeeding rulers of Jaipur made further additions to the City Palace, in the form of new buildings. There are a number of structures inside the palace complex, namely Chandra Mahal, Mubarak Mahal, Mukut Mahal, Maharani's Palace, Shri Govind Dev Temple and the City Palace Museum. The moment you enter the first square of the palace, you will come across the Mubarak Mahal, which was built by Sawai Madho Singh. It dates back to the 19th century and was meant to entertain the visiting guests.

Mubarak Mahal has now been converted into a costume gallery, in which royal attires of the royals have been displayed. It showcases royal costumes, folk embroidery, rare and precious Pashmina (Kashmiri) Shawls, Sanganeri prints and Benaras silk saris. After the first square is crossed, the next structure that comes in view is the Diwan-I-Khas. It is the hall where the king used to have private meetings and is reached through a beautiful gateway. Two sterling silver vessels, said to be the world's largest silver vessel, are on display inside the hall.

Maharaja Sawai Madho Singh II used these vessels to carry the holy water of River Ganges, on his trip to England. Another major attraction of the square is Diwan-I-Aam, the hall of public audience. Presently, it has been converted into an art gallery, which displays exquisitely painted ceilings and rare handwritten manuscripts of Hindu scriptures (original). Here, one can see miniature copies of the sacred Bhagwat Gita, along with miniature paintings belonging to the Rajasthani, Mughal and Persian Schools.

The next in the series of building is the Maharani's Palace, which used to serve as the residence of the queens. It has also been converted into a museum and showcases arms and weaponry dating back to the 15th century. The weapons displayed in the museum comprise of pistols, jeweled swords, guns and gun powder pouches, belt swords, chain armors, small cannons, poison tipped blades, a scissor-action dagger, etc. Thereafter, comes the most popular building of the City Palace, Chandra Mahal.

Chandra Mahal is a seven-storied monument, with each of the stories bearing a different name. The ground floor of the Chandra Mahal houses some rare exhibits. Even the courtyard outside the palace is adorned with a beautiful peacock. The top most floor of the palace is known as the Mukut Mahal. An architectural beauty, the palace is adorned with delicate paintings, mirror work on walls and floral decorations. Badal Mahal is situated opposite Chandra Mahal. The pathway between these two palaces leads to the Govind Dev Ji Temple.