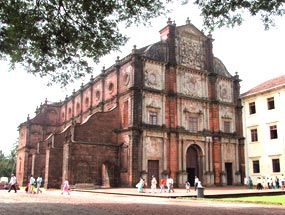 Basilica of Bom Jesus is situated at a distance of approximately 10 km from Panaji, the capital city of Goa. The church falls in the Old Goa area, which was the erstwhile capital of the Portuguese in the early days of their rule in India. The term 'Bom Jesus' means 'Good (or Holy) Jesus'. The construction work on the basilica was started in the year 1594 and it took 11 years to complete the monument. Initially, in 1594, Father Alexia de Menezes consecrated the Church. However, after completion of the construction work, the consecration was done again by the Primate of India.

The Basilica of Bom Jesus was given the status of a Minor Basilica in the year 1946 and it is the first Minor Basilica of India. The basilica also holds the distinction of being one of the best examples of baroque architecture in the country. The Church of Bom Jesus is one of the churches of Goa that have been declared as World Heritage Monuments. One of the major attractions of the church or the basilica comprises of the mortal remains of St. Francis Xavier; a member of the Society of Jesus (Jesuits) founded by Ignatius Loyola.

St. Francis Xavier left for the holy abode on 2nd December 1552, when he was on a sea voyage to China. As per the wishes of the Father, his mortal remains were brought back to Goa the following year. It is said that when the body reached India, after a whole year, it was still as fresh as it was on the day burial took place. A major landmark in the history of Christianity in India, the Bom Jesus Basilica attracts a large number of devotes every year. People come to Goa from different parts of the world to offer prayers at the church.

Every ten years, the body of Francis Xavier's is displayed at the basilica, on his death anniversary, for public viewing. The last display was held in the year 2004. It is believed that the saint has miraculous healing powers. Church of Bom Jesus is one of the wealthiest churches in the beach state of Goa. Carpeted with marble flooring and inlaid with precious stones, the church has a rich collection of St. Francis Xavier's paintings. The Basilica of Bom Jesus mainly has simple exteriors, with the exception of the elaborately gilded altars.

The Tomb of St. Francis Xavier was given as a gift by the last of the Medicis Cosimo III, The Grand Duke of Tuscany. It was carved by Florentine sculptor, Giovanni Battista Foggini, and took ten years to complete. The casket, in which the body of St. Francis is kept, is made of pure silver. The portico of the basilica is made of black granite and reflects an amalgamation of Doric, Corinthian and composite styles. The interiors of the church, on the other hand, are based on the Mosaico-Corinthian style.

The Basilica of Bom Jesus is approximately 183 ft in length, 55 ft in breath and 61 ft in height. Its main altar rises to a height of 54 ft and is 30 ft broad. The pillars as well as the detail have been carved from basalt. The church is cruciform on plan. There is also a single-storied structure adjacent to the church on its southern wing, which connects it with the Professed House. Some recent additions were carried out in Bom Jesus Basilica, including the flying buttresses on its northern side.

The facade of the Church represents Ionic, Doric and Corinthian Orders. The main entrance of the church is bordered, on either side, by two smaller ones. Each of them has Corinthian columns supporting a pediment. The complex of the Church of Bom Jesus comprises of two chapels, a main altar, a sacristy and a choir. There is also a belfry at the back. Beneath the choir is the altar of St. Anthony. To the left of this altar is a carved wooden statue of St. Francis Xavier. There is also a cenotaph kept in the center of the nave on the northern wall.

The cenotaph belongs to Dom Jeronimo Mascarenhas, the Captain of Cochin, who provided the resources for the construction of the church. Opposite the cenotaph, is a carved wooden pulpit, which has a canopy on top. On the three sides of the pulpit are figures of Jesus, the four evangelists and four doctors of the church. At the bottom of the pulpit are seven figures, which seem to be supporting it. Bom Jesus Basilica Art Gallery is situated on the upper level and displays the paintings of Dom Martin.