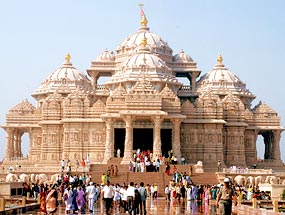 The Akshardham Temple of Delhi has been built by the Bochasanwasi Akshar-Purushottam Swaminarayan Sanstha, the same organization that built the Akshardham Temple of Gujarat. The temple is situated in East Delhi area, near the Akshardham Flyover. Spread over an area of 100 acres, it stands adorned with 20,000 statues, floral motifs, arches and exquisitely carved pillars. The construction work on this huge temple complex started in the year 2003 and it took approximately 2 years to complete it fully.

Pramukhswami Maharaj, the head of Bochasanwasi Akshar-Purushottam Swaminarayan Sanstha, inaugurated Akshardham Temple of New Delhi on 7th December 2005. The inauguration ceremony was also attended by the then President of India, APJ Abdul Kalam. A visit to the temple is the perfect way to explore the amazing world of Indian culture and get a unique view of the Hindu religion. Bordering the main temple complex are flourishing lawns, which stand adorned with water fountains and carved pavilions.

The grand temple complex is situated on the embankment of the River Yamuna. BAPS society incurred an expenditure of 2 billions on the construction of this magnificent monument. The main building inside the complex rises to a height of 141-ft and enshrines a magnificent statue of Lord Swaminarayan. One can see a marvelous amalgamation of pink stone and pure white marble in the construction of the Akshardham Temple of Delhi. The pink stone symbolizes endless Bhakti (devotion), while the white marble stands for absolute purity & eternal peace.

There are three halls inside the premises of the Akshardham Temple, where exhibitions are organized on a regular basis.

Hall 3 (Sanskruti Vihar)
The Sanskruti Vihar exhibition of hall number three provides you a peek into the 10,000 years of Indian history in just 10 minutes.

One of the major attractions of the Akshardham Temple of New Delhi is the light show at Yagnapurush Kund, India's largest step well. The visitors can enjoy the musical fountain and light show at night only. The temple complex also has a garden called Bharat Upavan (Garden of India), with brilliantly laid-out lawns. It also houses bronze sculptures of some great Indian personalities. Yogi Harday Kamal, a lotus-shaped sunken garden inside the complex, is engraved with quotes from famous personalities, like Shakespeare and Martin Luther King.