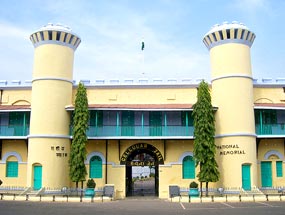 Cellular Jail was constructed under the British rule, in the year 1906, to serve as a prison for the Indian activists who participated in India's freedom struggle. During that time, it was also known as Kala Pani, meaning 'Black water', the term that is used for deep sea and implies exile. The jail is situated in Port Blair, the capital of Andaman & Nicobar Islands. Though the construction work on the prison was started only in the year 1896, the British had starting using Andaman & Nicobar Islands as prison as early as 1857.

The islands were believed to be the perfect place to serve as the prison venue, since they were isolated from the mainland and severed the links of the prisoners with their family and their country completely. At the same time, the prisoners could be used in chain gangs to construct prisons, buildings and harbor facilities. By the late nineteenth century, the population of prisoners started increasing at a fast pace. It was then that the need for a high-security prison was felt by the British and the foundation of the Cellular Jail was laid in Port Blair.

Initially, the Cellular Jail was a puce-colored brick building, for which the bricks were brought from Burma (now Myanmar). There were seven wings, with a central tower serving as the fulcrum. Guards used this tower for keeping a watch over the prison inmates. Each and every wing of the prison had three stories, with the total number of cells being 698. Each cell was 4.5 m x 2.7 m in size and there was a ventilator in each cell, situated at a height of 3 m. The cells were built in such a way so as to prevent any interaction between the inmates.

This solitary formation of the cells led to the naming of the prison as the 'Cellular Jail'. There were no dormitories in the prison. Most of the prisoners that were deported to the jail were independence activists. The political prisoners of Cellular Jail were repatriated to the mainland in 1937-38. The Andaman Islands came under invasion by the Empire of Japan in the year 1942, in which the British lost. The jail, which earlier housed prisoners of the British, now became a penitentiary for the British officers and soldiers.

Later, Indian Independence League members were also imprisoned here, tortured and then, killed. Under the Japanese regime, two of the wings of the Cellular jail were demolished. After the end of World War II, the British reoccupied the islands in 1945. When India attained independence, two more wings of the jail were pulled down. After protests by the former prisoners and political leaders, the demolition was stopped and the remaining three wings and central tower were converted into a National Memorial.

Govind Ballabh Pant Hospital was set up inside the premises of the Cellular Jail in the year 1963. The hospital has since been expanded and has 500 beds, with about 40 doctors serving the local population. The Indian Ocean Tsunami, which came in 2004, heavily damaged the Cellular Jail of Port Blair. Approximately a year back, on 10th March 2006, Government of India organized the Centenary celebrations of the Jail. A felicitation ceremony was also organized as a part of the celebrations, where the Government felicitated erstwhile prisoners.