Indian Weddings Home Remedies Ayurveda Vastu Yoga Literature
Sun Temple of Konark is one of the magnificent temples of India. This article will throw light on the Konark Sun Temple of Orissa, India.
Home : Monuments of India : Sun Temple Konark 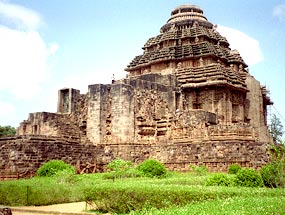 Konark Sun Temple is situated in the state of Orissa, quite near to the holy city of Puri. Dedicated to Surya, the sun God, the temple has been built as per Orissa's medieval architecture. Sun Temple of Konark also claims the distinction of being declared a World Heritage Site by UNESCO. The architectural beauty of the temple is beyond the scope of words. The intricate and exquisite sculptural work that adorns the temple only serves to enhance its splendor. Konark Sun Temple has been built in the form of the chariot of the Sun God.

The term 'Konarka' is actually a combination of two words, Kona meaning corner and Arka meaning sun. Thus, Konark means the corner of the sun. The city got this name since it was one of the first places in India where Sun worship was undertaken. It is believed that the Sun Temple of Konark was built under the patronage of King Narashimhadev I of the Ganga dynasty. It was meant as a commemoration of his victory over Muslims. In the early 17th century, an envoy of the Mughal emperor Jahangir desecrated the temple.

After this incident, the Sun Temple of Konark fell into disuse. Another legend has it that Samba, the son of Lord Krishna, got the Konark Sun temple constructed. It is said that Samba was afflicted by the fatal disease of leprosy, which was the result of a curse given to him by his father. In order to cure himself of the disease, he underwent almost 12 years of harsh penance. Impressed with his penance, Surya cured him of his disease. Thereafter, Samba built the temple in the honor of the Sun God.

The temple has 24 chariot wheels around its base; each being 10 feet in diameter and having a set of spokes and detailed carvings. These spokes serve as sundials, which can be used to ascertain the exact time. Seven horses have been shown as dragging the temple. The entrance to the Sun Temple is flanked by two stone lions, which seem to be guarding it and are shown subduing elephants. The space around the base of the temple as well as on the walls and roof is full of carvings of animals, foliage, men, warriors on horses and sensual scenes.

There are three images of the Sun God, positioned in a way that they catch the sunrays at dawn, noon and sunset. The roof of Konark Sun Temple is pyramidal in shape and rises to a height of 30 m. The various images adorning the temple comprise of those of the deities, the Surasundaris (heavenly damsels), human musicians, lovers and dancers. Along with that, different scenes from the courtly life have also been illustrated. The sacred pond where Samba is said to be cured from leprosy is situated quite near to the temple.

Konark Dance Festival
Every year, in the month of December, the Sun Temple of Konark plays host to the Konark Dance Festival. The festival is organized in an open-air theatre, built near the temple, which serves as the perfect backdrop to the dance performances. Dancers from all over the country congregate at Konark to take part in the festival. The dance forms performed at the festival include Odissi, Bharatnatyam, Manipuri, Kathak, Chhow, etc.

Sun Festival
Sun Festival (Magha Saptami) is also held at Konark on an annual basis. It is celebrated on the seventh day (saptami) of the bright half of the Hindu month of Magha (January/February).