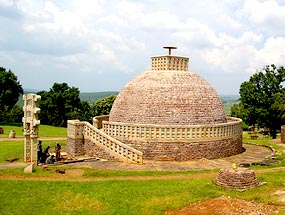 Sanchi is a village in Madhya Pradesh, believed to be one of the most important places in India associated with Buddhism. It is situated at a distance of approximately 52 km from the city Bhopal of India, also known as the City of Lakes. Sanchi is known for housing a number of Buddhist structures, like stupas, monasteries, temples, pillars, etc. Most of these structures date back to the period between 3rd century BC and 12th century AD and are a part of UNESCO's list of World Heritage Sites.

Mauryan emperor Ashoka was the founder of all the stupas at Sanchi, which were constructed in the honor of Lord Buddha. The most impressive as well as the most significant one of all the stupas is the Great Sanchi Stupa. It is a simple hemispherical brick structure, which has been built over the relics of Lord Buddha. One of the best-preserved stupas in central India, the Great Stupa at Sanchi is adorned by a chhatra, a parasol-like structure, intended to honor and protect the relics.

Surrounding the main Sanchi Stupa is a path, used for circumambulation. The path stands encircled by a railing, with four carved gateways that face the four different directions. These gateways are said to be carved somewhere around 100 AD. A unique feature of the all the stupas at Sanchi, including the Great Stupa, is that they do not have any images of Lord Buddha in human form. Inanimate figures, like footprints, tree, wheels and thrones, have been drawn or carved to represent the symbolical form of the Lord.

However, the figure that is most extensively used to depict Lord Buddha is a lotus flower. During the Shunga period, Sanchi Stupa was extended to quite an extent. Its facade was decorated with stones, railings and staircase, along with a harmika on the top. Sculptures, with different motifs and designs, have been chiseled to ornament the railings and gates of the stupa. The gateways of the Great Sanchi Stupa have been exquisitely festooned with illustration of incidents from the life of the Buddha.

The ornamentation the stupa gateways also includes the portrayal of male and female tree spirits. Since the female tree spirits are believed to be a symbol of fertility, they are usually used by Buddhists in the form of welcoming figures. The site where the village of Sanchi stands was discovered by General Taylor, in the year 1818. Later, 1919, an archaeological museum was established in Sanchi, by Sir John Marshall.