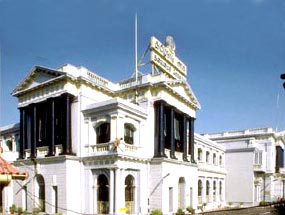 Location: Chennai, Tamil Nadu
Founded By: The British
Founded In: 1639

Fort St George claims the distinction of being the first fortress of the British in India. The British founded this citadel, in the year 1639, at Chennai, presently the capital city of Tamil Nadu. With the construction of the fort, the surrounding area also witnessed a surge in the settlements as well as construction activities. Infact, one can say that the present day city of Chennai (Madras) evolved around St George Fort only. East India Company had initially entered India to indulge in trade and commerce. Their first licensed trading started in the city of Surat.

However, soon, the company decided to enter into the spice trade, for which it was necessary to have a port nearer to the Malaccan Straits. A strip of coastal land, called Madraspattinam, was purchased from a local chieftain and the construction of a harbor and a fort began. The day, on which the construction work on the fort was completed, coincided with St. George's Day. This is the reason why the fort was named as Fort Saint George. Soon, it became the heart of merchant activity & developed into a new settlement area called George Town.

The town started expanding at a fast pace, including the surrounding villages within itself. The expanding settlements finally evolved into the present city of Chennai. Fort St George is surrounded by walls that are 6 m high and have endured numerous assaults in the 18th century. The fort also came into the possession of the French. However, the French control lasted for a period of three years only, from 1746 to 1749. Fort St George was then restored to the British under the Treaty of Aix-la-Chapelle.

In order to prevent outsiders from entering the premises of the fort, the British got a moat built around it. The area inside the moat was named as 'The White Town'. Fort Saint George boasts of a rich collection of artifacts belonging to the British colonial period, which is displayed inside its premises. Apart from the artifacts, the fort is also home to some French antiques. Many known personalities, like Thomas Pitt, Elihu Yale, Robert Clive and Lord Cornwallis, have either stayed in the fort or frequented it during British rule.

Many officials of the British East India Company used the fort for residential purposes also. Presently, the fort is serving as the administrative headquarters of the legislative assembly of the state of Tamil Nadu. The troops, which are in transit to different places in South India and Andaman Island, still have access to the barracks situated inside its premises. The most popular structures inside the fort include St. Mary's Church, Museum, Wellesley House and Clive House.

St. Mary's Church
The oldest Anglican Church in India, St. Mary's Church dates back to somewhere around 1678. It took approximately two and a half years to complete the church, which was built during the reign of Charles, the second. The prayer hall of St. Mary's Church served as the venue for the marriages of Robert Clive and Governor Elihu Yale (Founded of Yale University in the United States). The church, adorned with marble plaques, is popularly known as the 'Westminster Abbey of the East'.

Museum
The premises of Fort St. George display items that were kept in the fort during British rule. The building that houses the museum was completed in 1795 and initially; it was used as the office of the Madras Bank. The rich collection of the museum comprises of weapons, coins, medals, uniforms and other artifacts from Britain, France and India, almost all of which date back to the British period. The original letters written by Clive and Cornwallis, along with a set of period uniforms, also form a part of this collection. However, what serves as the icing on the cake is a large statue of Lord Cornwallis. All the relics exhibited at the museum serve as a reminder of the British rule in India.

Wellesley House
The Wellesley House is a major attraction of the St George Fort. On the first floor of the house is the banquet hall, which displays the paintings of the Governor of the Fort, along with the other high officials of the Regime. The battlements of the Wellesley House stand adorned with the canons belonging to Tipu Sultan. As one enters the building, the first sight that comes across is that of a 14.5 ft statue situated near a stairway, which was created by Charles Bank in England.

Clive House
Clive House, also known as the 'Admirality House', once served as the residence of Robert Clive. He first stayed in this house with his wife in the year 1753. A brick and mortar structure, Clive House was constructed more than 300 years back. The wooden floors of the house seem to be beautifully complimented by its intricately carved wooden staircases and high ceilings. A huge hall on the first floor is ornamented with Corinthian columns and was used as a banquet hall for parties and celebrations.