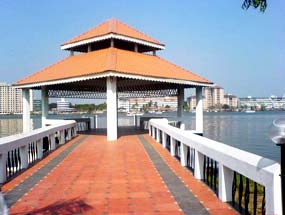 Bolghatty Palace is the pride of the beautiful Bolghatty Island, situated in the Kochi city of Kerala. The fort claims the distinction of being the one of the oldest palaces that were built by the Dutch in India and are still in existence. Dutch traders initially built a villa on the site, which was later expanded to form the Bolghatty Palace. Surrounded by lush green lawns, which were added later, the building once served as the palace of the Dutch Governor. It was only in the year 1909 that the Bolghatty Palace was leased to the British.

Thereafter, the palace became the residence of the British Governors, the seat of the British Resident of Cochin, during the British regime. After India gained independence in the year 1947, the palace came under the state and was later converted into a heritage hotel resort. Presently, the resort is being managed as well as operated by the Kerala Tourism Development Corporation (KTDC). Bolghatty Palace is situated in the middle of flourishing, tropical greenery and offers the pleasure of a laid back environment.

The location of the palace is such that it provides an awe-inspiring view of the backwaters all around. A two-storied building, it has a large lounge, in which historical portraits have been displayed. The rooms offered at the Bolghatty palace resort include executive suits, deluxe rooms, honeymoon suits and lake front cottages along the edge of the backwaters. One can also avail of the various facilities, like a mini golf course, swimming pool, Ayurvedic center and daily Kathakali performances.