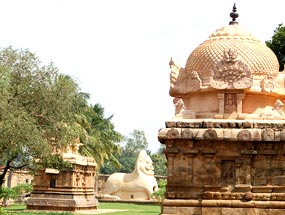 Gangaikondacholapuram Temple is situated near the Thanjavur city of Tamil Nadu. The temple was founded in the year 1020 and it took approximately nine years to fully complete the construction work. Gangaikondacholapuram Temple of Tanjore is dedicated to Lord Shiva, one of the Hindu Trinity of Gods. The person who can be credited with the erection of this temple is King Rajendra Chozhan, son of Raja Raja Chozhan. Rajendra built this temple to recreate his father's achievement, the Brihadeeswarar Temple of Thanjavur.

The time when the Gangaikonda Cholapuram Temple of India was built represents the golden period of the Cholas. During those years, the Cholas were engaged in the invasion of northern territories and wealth was flowing in from all directions. The vimanas of the temples have been adorned with exquisite carvings and reflect a heavy influence of the Northern styles. One can see magnificent carvings on the hard southern granite stones of the temple. The sculptures of the temple are quite characteristic of the temples constructed by the Cholas.

This elaboration and ornamentation, a result of contact with the Northern Chalukya kingdoms, reflects a departure from the earlier Chola and Pallava style of subtleness and simplicity. Numerous sculptures embellish the interiors of the Gangaikondacholapuram Temple of Tamil Nadu. The most impressive as well as most splendid sculptures are those of The Nataraja (Shiva in the form of a Cosmic dancer) and Coronation of King Rajendra Chozhan by Lord Shiva and Goddess Parvati.

Not to be missed are the sculptures of the Dancing Lord Ganesha and the Ardhanarishwar (the man-woman manifestation of Lord Shiva). The Ardhanarishwar form of Lord Shiva represents both duality of divine energy, with its one half having masculine characters and the other being that of an ornamental female. Inside the sanctum sanctorum is a four meter high Shiva Lingam. Surrounding the sanctum are two walls, which were meant to provide a private worship area to the royal family.

The entrance of the sanctum sanctorum is adorned with a beautifully crafted image of Goddess Saraswati. This image reflects an influence of Chalukyas in the architecture of the temple. One also comes across the 'Suryapita' icon that signifies sun worship as well as the 'Navagrahas' (nine planets), another influence of the Chalukyan connection. The Cholas were quite known for being scrupulous record keepers. The inscribed texts in copper plates and temple walls serve as a proof of this quality.

The inscriptions on the walls tell stories of many conquests of the warrior king, land donated during the period, coronation of kings etc. Gangaikondacholapuram Temple has witnessed numerous wars in the past. It used to serve as a garrison and fortified cantonment of, first, the Pandyas and, later, of the British. The temple has also been the target of several lootings and pillages. However, all this could never rob Gangaikondacholapuram Temple of its architectural beauty and sculptural treasures.