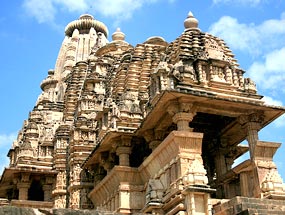 Khajuraho Temples are situated in a village in Madhya Pradesh, bearing the name of Khajuraho. The rural ambience and the rich cultural heritage of the village serve as the perfect backdrop to the temples, which depict the sensual pleasures enjoyed by human beings. Khajuraho temples also reflect the maturity of the people belonging to that decade. One of the most popular tourist attractions of India, the temples were constructed somewhere between 950 and 1050 AD, under the rulers of Chandel Empire.

Initially, the number of temples in the Khajuraho complex was eighty-five. However, with the decline of the Chandela Empire, the temples went into neglect and were damaged by the ravages of nature. They were once again discovered in the 20th century and restoration work on them was started. Presently, only twenty-temples have survived. The murals adorning the interiors of the Khajuraho temples serve as an illustration of the lifestyle and times of the Chandela rulers.

Each of the temples comprises of three main compartments i.e., the entrance (ardhamandapa), the assembly hall (mandapa) and the actual sanctum (garbha griha). The temples have been divided into three groups, based on their geographical patterns, namely western, eastern and southern. The theme of the Khajuraho temples is mainly the celebration of woman and her countless moods and aspects. The temples, built of sandstone, have also been listed as a UNESCO World Heritage Site.

Western Group of Temples
The best as well as the largest group of temples in Khajuraho comprises of the Western Group.

Kandariya Mahadeo
Kandariya Mahadeo is the largest temple in the Western group. It comprises of about 900 statues, of which the grandest idol is that of Lord Shiva, which rises to a height of 31 m. The sanctum houses the Shiva Lingam, while the main shrine has carved images of various Gods, Goddesses and apsaras (heavenly maidens). The entrance arch, pillars and ceilings are also beautifully carved. The outer walls of the transept have three horizontal panels, which depict deities of the Hindu pantheon and groups of lovers.

Chaunsat Yogini
Chaunsat Yogini is the oldest surviving temple of the western group. It was constructed in the year 900 and is dedicated to Goddess Kali. Initially there were 65 cells in the temple, out of which only 35 are left. However, the image of Goddess Kali that was enshrined in the temple could not survive the travails of time.

Chitragupta Temple
Chitragupta Temple is dedicated to Surya, the Sun God. The inner sanctum of the temple has a 5 feet high image of the Sun God, who is shown riding a chariot. One can also see images depicting royal processions, group dances and other scenes of sheer luxury.

Vishwanath Temple
Vishwanath Temple is dedicated to Lord Brahma, one of the Hindu Trinity of Gods. Lions guard the northern entrance of the temple, while the southern steps are flanked by elephants. Opposite this temple is the shrine of Nandi Bull.

Lakshamana Temple
Lakshamana Temple is dedicated to Lord Vishnu and houses three-headed idols of Vishnu's incarnations, Narasimha and Varaha. The rafter on the entrance shows the Holy Trinity of Brahma, Vishnu and Shiva with Goddess Lakshmi.

Matangeshwara Temple
Matangeshwara Temple is situated outside the grounds of the western group. It is dedicated to Lord Shiva and enshrines an eight feet high lingam. To the south of the temple is the open air Archaeological Museum, which exhibits an amazing collection of statues and frescoes collected from the area.

Parsavanath Temple
Parsavanatha Temple is the largest Jain temple of the eastern group, dedicated to Lord Parsavanath. The northern wall of the temple is adorned with sculptors that depict everyday activities, like a young girl removing a thorn from her foot. There is also the bull emblem of first Tirthankara, Adinath.

Ghantai Temple
Ghantai Temple is another Jain temple. It is known for an amazing frieze, which exhibits the 16 dreams of Mahavira's mother, along with a multi-armed Jain goddess perched on a winged Garuda.

Adinath Temple
Adinath Temple is the last one of the three Jain temples in the eastern group. It is dedicated to Adinath, the first Jain Tirthankara.

Hindu Temples
There are three Hindu temples in this group, namely the Brahma temple, the Vamana temple and the Javari temple.

Southern Group
The Southern Group of temples lies at a distance of approximately 5 km from the Khajuraho village.

Duladeo Temple
Duladeo Temple is dedicated to Lord Shiva and stands adorned with sensual images of the apsaras (heavenly maidens).