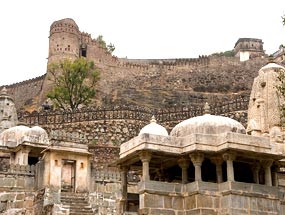 Kumbhalgarh fort is situated approximately 64 km to the north of the Udaipur city. The fort is believed to be the second most significant bastion in the Mewar region of Rajasthan, after the Chittorgarh fort. It dates back to the 15th century and was constructed by Rana Kumbha. Kumbhalgarh fort is nestled in the Aravali Ranges and because of such hostile topography; it counts amongst the few forts in India that have remained unconquered till date, except for one single seizure. The one time that Kumbhalgarh fell was to the combined army of Mughals & Amber rulers.

The main reason for the defeat was acute scarcity of water. The fort served as a refuge to numerous rulers of Mewar, including Udai, the Baby King of Mewar. Another feather in the cap of the Kumbhalgarh fort is that it was the birthplace of King Maharana Partap, one of the most popular rulers of Mewar. The huge fort houses numerous structures inside its complex and is like a city in itself. There are a number of palaces in the Kumbhalgarh fort, of which the most beautiful one is the Badal Mahal, Palace of the Clouds.

Even the several temples inside the fort are worth mentioning. The height at which Kumbhalgarh fort is situated makes it the perfect place to have a bird's eye view of its surroundings. The walls enclosing the fort are quite thick and have a circumference of approximately 36 km. It is said that the width of the walls is enough to accommodate eight horses abreast. Even the ruins situated inside the compound offer amazing views. Renovations were undertaken at the fort in the 19th century, under the orders of Maharana Fateh Singh.

He pulled down the palace built by Rana Kumbha and constructed an inner fort in its place. Thus making Kumbhalgarh fort the only fort in India that has a fortress within itself. The inner fort is known as the Kartargarh Fort. This fort comprises of 365 temples and shrines, of which one is dedicated to Lord Shiva and houses a huge Shiva Lingam. Situated near the Kumbhalgarh fort is the Kumbhalgarh Sanctuary, known for its rich flora and fauna. It is one of the few sanctuaries in India that allow people on horseback.