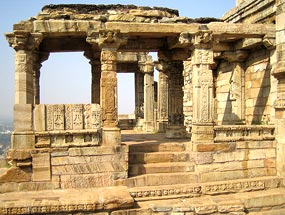 Chittorgarh Fort is situated at a distance of 175 km to the east of the Udaipur city of Rajasthan. In the past, the fort comprised of one of the most desired seats of power in India. The fort is believed to have been named after Chitrangad Maurya. It is said that the Chittorgarh Fort was given to Bappa Rawal, founder of the Sisodia dynasty, as dowry in mid-8th century, when he married the princess of the Solanki dynasty. Spread over an area of 700 acres, the fort comprises of numerous ramparts, palaces, temples and towers.

Chittorgarh fort is reached through a zigzag road of one km. It stands on a 180 m high hill, which seems to be rising from the plains below. The road that brings one to the fort further leads to its seven gates, namely Padan Pol, Bhairon Pol, Hanuman Pol, Ganesh Pol, Jorla Pol, Lakshman Pol and Ram Pol. Between the second and third gate, you will come across two chattris (cenotaphs), which were constructed in honor of Jaimull and Kulla, the two heroes of the siege laid by Emperor Akbar in the year 1568.

Suraj Pol, or the 'Sun Gate', is the main gate of the Chittorgarh fort of Rajasthan. There are a number of palaces inside the fort complex, such as Rana Kumbha Palace, Fateh Prakash Palace and Rani Padmini's Palace. All the palaces, along with the Tower of Victory, boast of Rajput architecture. Several temples, reservoirs and palaces were added on to the fort later, somewhere between the 9th and 17th century. One can also see a huge complex of Jain temples inside the premises of the Chittorgarh fort.

There is also an opening inside the fort, where Rani Padmini is said to have committed Jauhar (self-immolation by the females), along with the other women of the court. Situated close to this opening is a big water reservoir, where water flows out from a rock that is shaped in the form of cow's mouth. The shape of the rock has led to the reservoir being called as 'Gaumukh' (cow's mouth). Other major attractions of Chittorgarh fort include Bhimtal Tank, Neelkanth Mahadev Temple, Meera Temple, Kumbha Shyam Temple and Kalika Mata Temple.

Kirti Stambh
Kirti Stambh is also known as the 'Tower of Fame'. It is a seven-storied structure that narrows down from the bottom to the top, with its width lessening from 30 ft at the base to 15 ft at the top. The tower has a tapered stairway with 54 steps and was constructed around the 12th century. It is dedicated to Adinath, the first Jain Tirthankara, and houses a striking 5 ft high statue of the saint. The Jain sculptures adorning the tower were bought from outside the state.

Vijay Stambh
Vijay Stambh is also known as the 'Tower of Victory'. Maharana Kumbha got this tower built in the year 1440, as a commemoration of his victory over Mohammed Khilji. It is perched on a plinth that is 47 square ft wide and 10 ft high. Vijay Stambh is 122 ft in height and has a width of 30 ft at the base. The nine-storied tower stands ornamented with sculptures of Hindu deities as well as stories from the Great Indian Epics, Ramayana and Mahabharata. A circular stairway with 157 steps leads to the terrace, which provides a splendid view of the city.

Invasions
Chittorgarh Fort has been annexed by a stronger army three times in its past. The first siege occurred in the year 1303, when King Ala-ud-Din Khilji attacked the fort to kidnap Queen Padmini, wife of Rana Rattan Singh. Sultan Bahadur Shah of Gujarat seized the fort in 1535. The last, and the final, siege on the fort was laid by Mughal Emperor Akbar, who razed the fort to the rubble once again. It was only in 1616 that Mughal emperor Jehangir restored Chittorgarh fort back to the Rajputs, but even then, it was not resettled.