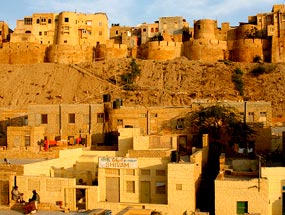 Jaisalmer Fort, also known as the Sonar Quila (Golden Fort), is situated on the outskirts of the Jaisalmer city of Rajasthan. The fort was so named since it is situated amidst the golden vastness of the desert sand. The golden hues of the desert ambience, along with the setting rays of the sun, make the color of the fort look like that of gold. The fort of Jaisalmer swathes a whole township within its complex, including numerous havelis, temples, residential complexes and a number of other structures.

With the opening of the trade routes at the time of the Rajputs, the merchants started acquiring power as well as noble status in the royal courts of the Bhatti rulers. Inspired by the royals, they started constructing havelis, with intricately decorated walls and ceilings and heavily carved outdoors and interiors. Some of the havelis even outshined the palaces constructed by the royals. The craftsmen were usually Muslims, who displayed rare architectural purity.

The sculptural filigree, screen windows, delicate pavilions and beautiful balconies used by them to fill up the facades display amazing exquisiteness. Some of these havelis are still inhabited by the descendants of the wealthy merchants. The residential complexes inside the fort include the ones used by armies and traders, especially the ones that fell on significant trade routes. The magnificent temples of Jaisalmer fort are also worth visiting.

These include a group of Jain temples, dating from 12th century to 15th century. Standing tall at a height of approximately 30 meters over the city, the Jaisalmer fort is surrounded by massive battlements. Walking down the narrow lanes of the fort is an experience in itself. The entrance to the Sonar Quila or Jaisalmer fort is provided through its four main gates, namely Ganesh Pol, Suraj Pol, Bhoot Pol and Hawa Pol.