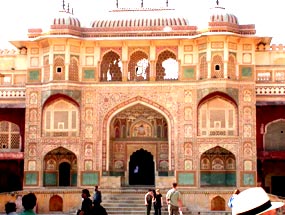 Location: 11 km from Jaipur, Rajasthan
Founded By: Raja Man Singh I
Completed By: Sawai Jai Singh I
Founded In: 1592

Amber Fort is situated on the outskirts of Jaipur, at a distance of 11 km from the city. The fort once served as the ancient citadel of the ruling Kachhawa clan of Rajasthan, before they shifted their capital to the present day Jaipur. The architecture of the Amer Fort Palace reflects a magnificent blend of the Hindu and Mughal architectural styles. The fort boasts of a picturesque setting, amidst charming, jagged hills. The construction work on the Amber fort was started under Raja Man Singh I, in the year 1592.

However, the fort could not get fully completed during the lifetime of Raja Man Singh I. It was Sawai Jai Singh I who got the construction work completed entirely. Amber Fort is a red sand stone and white marble monument, which has a magnificent aura. The inner walls of the fort place are adorned with painting scenes with carvings, precious stones and mirror settings. The forefront of the fort has Maota Lake providing the perfect look. The sturdy walls of the Amer Fort Palace were intended to serve as a protection against the attacking enemies.

The fort has a total of four sections, each of them with separate premises. To enter the main area of the fort, one has to either climb up through the grand stairway or else go through the broad aisle on the back of an elephant. The main gate of the fort is known as Surajpol and it leads to Jaleb chowk. The chowk is the main courtyard providing entrance to the stairway that leads to the palace. In the past, this chowk served as the area where returning armies were welcomed and displayed their war earnings to the public.

Shila Devi Temple (Kali Temple)
Just before the entrance to the Amer Fort Palace, there is a steep aisle and a narrow staircase that leads to the Shila Devi Temple or the Kali Temple. Apart from its mysterious history, the temple is also known for its huge silver lions. The temple is adorned with silver doors, which have a raised relief. As per the legend surrounding the Shila Devi Temple, Maharaja Man Singh I had prayed to the Goddess to ensure his victory over the rulers of Bengal. The Goddess appeared in his dreams and asked him to retrieve Her statue from the sea near Jessore (now in Bangladesh) and enshrine it in a proper temple. The Maharaja defeated his enemies and as per the orders of the Goddess reclaimed the statue and installed it in the Shila Devi Temple.

Diwan-I-Aam (Hall of Public Audiences)
Diwan-I-Aam, or the hall of public audiences, is situated in the second courtyard of the fort. It was here that the Maharaja used to receive the general public and hear their petitions. Built in the shape of a pavilion, the hall has a double row of columns, each capped by an elephant shape, and a lattice gallery.

Ganesh Pol
Ganesh Pol is a huge and impressive gateway, which is situated to the south of the Diwan-I-Aam. It has been painted with typical Rajasthani motifs and leads to the Charbagh.

Jai Mandir (Hall of Victory)
Jai Mandir, or the hall of victory, is another major attraction of the Amber Fort Palace of Rajasthan. It is known for its inlaid panel and glittering mirror ceiling.

Sukh Niwas
On the other side of the Jai Mandir is Sukh Niwas, the residence of pleasure or pleasurable residence. Adorned with an ivory inlaid sandalwood door, the palace provides a beautiful view of the fort rampart as well as its reflection in the Moata Lake.

Zenana
Zenana is the palace of the women and is situated in the forth courtyard. All the rooms of the Zenana have been connected through a common corridor and are designed in such a way so as to ensure privacy in each room.