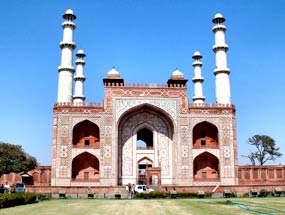 Akbar's tomb is situated in the town of Sikandra, which falls in the suburbs of Agra. The tomb, or the mausoleum, houses the mortal remains of one of the greatest Mughal Emperors of India, Akbar, and was built by him during his own lifetime. However, Akbar's son Jehangir got the monument fully completed by constructing its topmost portion in white marble. Sikandra tomb of Akbar is of a pyramidal shape and has five stories in toto. In the basement is situated the real cenotaph of the Emperor, while the top floor comprises of the false cenotaph.

The architecture of Akbar's tomb represents a blend of different architectural styles. The Islamic style is reflected in its splendid entrance, delicate patterns, admirable jali work, Persian style calligraphy as well as the garden (Charbagh) layout. However, one can also see the influence of the local style of architecture in the use of chhatris (canopies), absence of a dome, tiers of airy pavilions, etc. The same pattern can also be seen in the edifices built by Akbar inside the Agra Fort and the deserted city of Fatehpur Sikri.

The entrance to the Akbar tomb is through a gateway in the south, which leads to a large enclosed garden. The gateway stands ornamented with floral and geometrical arabesque embellishments in white color. On each of the corner of the monument is an elegant minaret, made of white marble. The elegance of the calligraphic decoration adorning the gateway is beyond description, while its high central arch is quite simple. The four gardens (Charbagh) lead to the main structure of the tomb.

Apart from the top floor that has been constructed in white marble, the entire monument is made up of red sandstone. Surrounding the entire ground floor of Akbar's tomb, except the center of the southern side, are covered passages. These passages have been divided into many bays, with the help of massive arches and piers. The square stories of the tomb have arcaded verandah, with cloisters and a bunch of cubicle on all the sides. In the second story, a few of the kiosks have marble pyramidal roofs also.

The other kiosks in the second story stand adorned with cupolas. Each angle at the third story has a small square room. The topmost story, made entirely of white marble, has a square court that has been left open to the sky. Encircling the central courtyard, which stands divided into bays, are slender arches and piers. There is also a square platform in the center of the courtyard. It is on this platform that the white marble cenotaph has been laid. The cenotaph has been adorned with arabesque and floral pattern carvings.