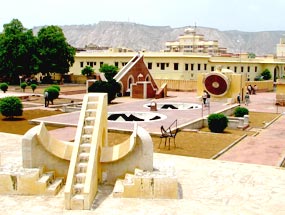 Jantar Mantar of Jaipur claims the distinction of being the largest stone observatory in the world. It is situated near the City Palace complex and was built by Maharaja Jai Singh II in the year 1727. It took approximately six years to complete the observatory, which was even designed by Jai Singh himself. Jantar Mantar of Jaipur is one of the five astronomical observatories built by Maharaja all over the country. The original name of the observatory was Yantra Mantra, meaning instruments and formulae.

However, people mispronounced the name as 'Jantar Mantar' and gradually this became the official name of the observatory. Jantar Mantar houses an amazing collection of astronomical instruments. The most applaudable feature of the observatory is that even after so many years it still provides accurate information. The scientific settings and shapes of the compound instruments of Jantar Mantar serve as a reminder of the advancement of the Medieval Indian Astronomy. The entire structure of Jantar Mantar has been constructed with stone and marble.

Metals have not been used in the construction of the observatory, since metal instruments fell short of Jai Singh's expectations. It has fourteen statistical instruments, which serve the purpose of measuring time, predicting eclipses and ascertaining other astronomical events. Jantar Mantar was renovated in the year 1901 and in 1948; it was declared as a national monument. The most popular instrument of the observatory is the Sundial, which is 27.4 m high and tells the time with an accuracy of about two seconds.

Kranti Yantra
Kranti Yantra is a large instrument, which is used for measuring the longitude and latitude of celestial bodies.

Diganta Yantra
Diganta Yantra is used to correctly ascertain the azimuth (arc of the celestial great circle from Zenith to horizon) of the planetary bodies.

Jai Prakash Yantra
Jai Prakash Yantra determines the precise coordinates of celestial bodies. It has a small iron plate, which is strung between the crosswire. This plate is used to know the longitude and latitude of the sun as well as and the zodiacal sign it is passing through.

Rashivalayas Yantra
Rashivalayas Yantra is quite similar in operation to the Samrat Yantra. The yantra has a separate sundial for each of the zodiac signs. Five sundials, those belonging to Gemini, Taurus, Cancer, Virgo and Leo, lie at the back from north to south. Opposite them are the ones related to Aries and Libra, followed by those of Aquarius, Pisces, Capricorn, Scorpio and Sagittarius. Using this yantra, one can taking readings the moment a zodiacal sign crosses the meridian.

Dakshina Yantra
Dakshina Yantra is basically a wall that is aligned with the north-south meridian. It helps in determining the position and movement of the celestial bodies at the time when they are passing over the meridian.

Disha Yantra
Disha Yantra performs only one function, which is to point towards the northern direction.

Raj Yantra (King of Instruments)
Raj Yantra, the King of Instruments, is used in the preparation of the Hindu calendar. For the purpose, a telescope is fixed over the central hole and a sighting bar is attached at the back. The plain disk is used to record the sightings.

Narivalya Yantra
Narivalya Yantra is a sundial, which has two dials. One of the dials faces north when the sun is in the Northern Hemisphere, while the other faces south for the rest of the year.

Dhruva Yantra
Dhruva Yantra determines the position of the Pole Star at night, along with that of the 12 zodiac signs.