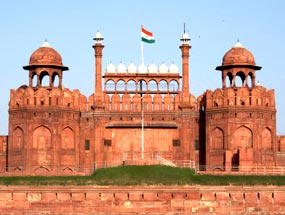 The Red Fort of Delhi serves as an articulate reminder of the grandeur of the Mughals. It is also known as the 'Lal Quila' and finds a mention in the UNESCO's World Heritage Sites list. Mughal Emperor Shah Jahan got the fort constructed, when he shifted from Agra, as the venue for his new capital, Shahjahanabad - the seventh Muslim city in Delhi. The fort was built, completely of red sandstone, at the eastern edge of Shahjahanabad. Infact, Red Fort gets its name from the massive red sandstone wall enclosing it.

The wall measures approximately 2.5 km in length, while its height varies from 16 m on the riverside to 33 m towards the city. Situated along the Yamuna River, the fort mostly stands surrounded by a moat that was fed through the river. In the northeastern corner of Lal Quila, one can see an older fort. Known as Salimgarh, this fort was built as a protection by Islam Shah Suri, in the year 1546. The foundation of the fort was laid down in 1638 and it took approximately 10 years to complete it fully.

As per another belief, the old fort is the ancient city of "Lal Kot', invaded by Shah Jahan. In the year 1783, Red fort fell to the Sikhs, who entered it and occupied the Diwan-i-Aam. At last, the entire city of Shahjahanabad was surrendered by the Mughal wazir in cahoots with his Sikh Allies. The Revolt of 1857 saw the Red Fort of Delhi being used as the headquarters. Later, British army claimed its occupation and destroyed numerous pavilions and gardens. It was only in 1903 that restoration program on the fort was undertaken.

Diwan-i-Aam of the Red Fort is a massive pavilion, where the Emperor used to listen to the petitions of the public. In the middle of the eastern wall of the pavilion, one can see an ornamented throne-balcony that was used by the emperor. The design of the balcony was based on the throne of Solomon. Just behind the throne are the imposing private apartments of the Emperor. These apartments stand adorned with a row of pavilions, which used to provide magnificent views of the Yamuna River.

An incessant water channel, known as the Nahr-i-Behisht or the 'Stream of Paradise', runs through the center of all the pavilions, connecting them in the process. The water channel draws water from the Yamuna itself, with the help of a tower in the northeastern corner of the fort, which is known as the Shah Burj. The basic architectural style of the Red Fort of Delhi reflects Islamic influence. However, each of the pavilions has some elements that are characteristic of the Hindu architecture, which is a typical trait of Mughal buildings.

The two pavilions that lie in the southernmost corner of the fort used to serve as the zenanas (or women's quarters). One of them is known as Mumtaz Mahal and has been converted into a museum. While, the larger as well as the more flamboyant one is the Rang Mahal (pleasure palace). It stands festooned with a gilded ceiling and a marble pool, which is fed by the Nahr-i-Behisht. The third pavilion from the south is known as the Khas Mahal. This palace used to house the remarkable royal chambers.

It comprises of a suite of bedrooms, prayer rooms, a veranda and the Mussaman Burj, a tower. The tower was used by the emperor to come in front of his people in a daily ceremony. The next pavilion that you will set your eye upon is the Diwan-i-Khas, the ostentatiously decorated hall where all the private meetings of the Emperor, along with the ministerial and court gatherings, used to take place. It is the most magnificent pavilion in the entire Lal Quila and is festooned with stone-studded and gilded patterns on the columns.

The original ceiling of this hall was made of silver and inlaid with gold. However, this ceiling was later replaced with a painted wooden one. The next pavilion in the fort comprises of the hammam, or the Turkish style baths. Marble and colored stones were used to ornament the entire structure. Moti Masjid, or the Pearl Mosque, lies to the west of the baths and was added to the Red Fort in the year 1659. It was built to serve as the private mosque of Emperor Aurangzeb, the successor of Shah Jahan.

The mosque is a small three-domed structure of white marble, with exquisite carvings and a three-arched screen. The northern portion is covered by a formal garden known as the Hayat Bakhsh Bagh, or the 'Life-Bestowing Garden'. In the middle of the garden are two bisecting channels of water. On both the ends of the channel, we see pavilions. The third pavilion in the garden is situated at the intersection point of the channels and was built by Bahadur Shah Zafar, the last Mughal Emperor, in the year 1842.

Lahore Gate
Lahore Gate provides the main entrance to the Red Fort. Flanked by semi-octagonal towers, the gate is so named because it faces west, towards the city of Lahore. Aurangzeb constructed the ramparts before the original Lahore gate, with the aim of making entry into the fort more difficult. It is at the top of this fortification that the Prime Minister of India hoists the national flag every year, on the Independence Day.

In 1986, all the windows of this gate were blocked with red sandstone for security reasons. In the year 1965, a lift was constructed just before the Lahore Gate and is now mainly used during the Independence Day celebrations. There are a number of structures inside the Lahore Gate. The wooden doors of the Lahore Gate are covered with bronze. It is said that these doors were so heavy that elephants were used to open and close them.

Chatta Chowk
Chatta Chowk comprises of the apartments that flank the passages one comes into after entering the Lahore Gate. Another name for the chowk is Meena Bazaar and it was one of the first covered bazaars of the 17th century. During the Mughal era, shops were located on the upper as well as lower arcades and used to sell silks, jewelry, gems, silver ware and other artistic objects. However, today the shops occupy the lower arcade only and the items sold by them include souvenirs, eatables and drinks. Natural sandstone was used to make the arcades of the Chatta Chow. The shops that were situated in the lower arcade had cusped arches.

Naubat Khana (Naqqar Khana)
Naubat Khana, also known as Naqqar Khana, is the Drum House that was used for playing music in the Mughal era, five times a day. Large musical instruments like kettledrums, hautboys (shehnai) and cymbals were kept in the music galleries of the house. Another name for the place was Hathipol as everyone, with the exception of royal princes, had to dismount from their elephants (hathi) here only.

A red sandstone structure, it is rectangular in shape and is adorned with carved designs that were originally painted with gold. In the interiors of the Naqqar Khana, a combination of colors was used to paint different layers. The first floor of the edifice has been converted into a War Memorial Museum. It houses a rich collection of arms and armaments that were once used by the Mughal Emperors. Along with that, one can also see paintings of various kings and rulers and a brief narration of the Revolt of 1857.