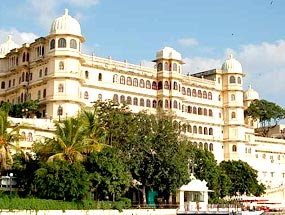 One of the most popular tourist attractions of Udaipur is the City Palace, situated in the heart of the city. The palace towers over Lake Pichola and counts amongst the most beautiful constructions by the Rajput rulers of Rajasthan. Even though the interiors of the City Palace of Udaipur are much more exquisite than its exteriors, it does not fail to mesmerize its onlookers. The Rajput love for art and architecture is truly reflected in the architecture of this magnificent palace, which was built by Maharana Uday Singh of the Sisodia clan.

The Maharana initiated the construction work of the City palace shortly after he founded the city of Udaipur. With time, the throne of Uday Singh was occupied by successive Maharanas, who added more structures to the palace complex. However, one does not find any incongruity in the overall design of the palace. Rather, people applaud the charming harmony and synchronization of the construction work. Presently, the old parts of the museum have been converted into a museum, while two new portions are serving as hotels.

The architecture of the City Palace of Udaipur represents a beautiful fusion of the European and Chinese architectural styles. Each of the numerous palaces, courtyards and gardens of the edifice seeks to exude a distinct charm. City Palace is made up of granite and marble and its main entrance is provided by Hathi Pol, the Elephant Gate. Coming into the view next, are the Bada Pol (gate) and the Tripoli Gate. It was at the Tripolia Gate that the kings used to weigh themselves in gold and silver and later distribute the same amongst people.

After the Tripolia Gate, one comes across the courtyard in which elephant fights used to be organized. One of the popular structures of the City Palace is the Suraj Gokhada, the place where King addressed his subjects, mainly during an emergency situation. The Moti Mahal situated inside the palace premises is adorned with awe-inspiring mirror work. The section near the main entrance has been converted into a weapons museum, where a large amount of armories, including the deadly two-pronged sword, has been displayed.

There is also a Mor Chowk (Peacock Square) inside the palace, where beautiful glass mosaics of peacocks adorn the walls. These peacocks represent three different seasons, namely summer, winter and monsoon. The Krishna Vilas of the City Palace houses a rich collection of paintings, which illustrate varying events and moods in the life of the Maharanas. Then, you have Manak Mahal, which is known for its amazing collection of crystal and porcelain figures. The Bhim Vilas Palace stands festooned with splendid paintings of Radha-Krishna.

There is also a Zenana (ladies) Mahal inside the complex of the City Palace of Udaipur. The palace of the ladies and Dilkhush Mahal are popular for the marvelous frescoes that beautify their walls. The Chinese and Dutch ornamental tiles that decorate the Chini Chitrashala lend it a timeless charm. If the Sheesh Mahal boasts of thousands of sparkling mirrors, the Laxmi Vilas Chowk has a luxuriant assortment of Mewar paintings. Do not forget to visit the Amar Vilas, which has beautiful hanging gardens with fountains, towers and terraces.

The edifice also provides a breathtaking view of the not only Lake Pichola, but also the entire city of Jaipur. Some time back, the Shiv Niwas Palace and the Fateh Prakash Palace were converted into luxury hotels. Still, these palaces are definitely worth a visit. The Crystal Gallery of Fateh Prakash Palace is especially popular, as it houses a rare collection of Osler's crystal items. These items were ordered from England, by Maharaja Sajjan Singh, but he passed away before they could be delivered.