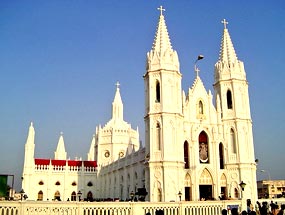 The Velankanni Church is situated in the Velankanni village, which falls in the Nagapattinam district. It lies at a distance of approximately 350 km to the south of Chennai, the capital city of Tamil Nadu. The church is also known as 'Our Lady of Good Health' and was built in the late 16th century. Later, modifications were made to it by the Portuguese. Velankanni Church of India is a colossal structure, which has been built as per the Gothic style of architecture.

The building is totally painted in white color, except for the roof that is made of tiles of striking red color. The serene and peaceful environs of the Vailankanni Church further add to its splendor. There are interesting legends associated with the construction of the church. The local tradition talks of the apparitions of Virgin Mary at Vailankanni, atleast three times. The second time the Lady appeared, she cured a crippled boy. Just the night before this cure, She had appeared in the dream of a man and asked him to build a chapel for Her.

She asked the cured boy to call that man and after both of them reached the spot of the apparition, She appeared again. Thereafter, the boy and the boy built a thatched chapel for Her and named it the 'Mother of Good Health'. The third time Virgin Mary appeared, she saved some Portuguese merchant sailors from a violent storm. They went to the Thatched Chapel to say their thanks and on their return trip, built a small permanent chapel. On their subsequent visits, they further extended the chapel.

The main statue that they had placed at the altar of the church showed The Lady holding the Baby Jesus, while standing on the globe. Velankanni Church was given the status of a Parish in the year 1771. Father Antonio de Rozario served as the First Parish Priest. In 1962, His Holiness Pope John XXIII raised it to the status of basilica. Every year, on 29th August, the feast of our lady is held at the Vailankanni Church of Tamil Nadu. Holy masses are conducted there in at least eight languages, namely Tamil, English, Malayalam, Kannada, Telugu, Konkani, Hindi and Marathi.