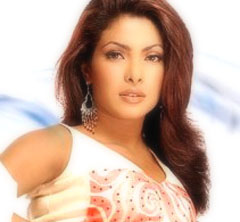 Priyanka Chopra first acted in Tamil film "Thamizhan ". Her debut Hindi film was "The Hero" opposite Sunny Deol. Though the film was average rated, it went on to become one of the highest grossing films of that year. Priyanka Chopra's next film was "Andaaj" opposite Akshay Kumar. "Andaaj" was a successful film at box office and Priyanka was nominated for Filmfare Best Actress Award. Her next release was "Aitraaz", which is a Hindi remake of the Demi Moore-starker "Disclosure". Prianka won the Filmfare Best Villain Award for her performance in "Aitraaz". Since then she has given many Hit films such as "Bluffmaster" opposite Abhishek Bachchan, "Mujhse Shadi Karogi" opposite Akshay Kumar and Salman Khan and "Krissh" opposite Hrithik Roshan. Priyanka Chopra was voted Sexiest Asian Woman of 2006 in Eastern Eye, an Asian newspaper published in Britain.