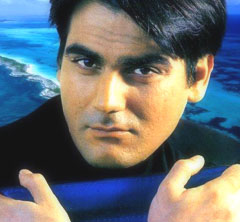 Mini Biography
Arbaz Khan is son of script writer Salim Khan and brother of the popular film star Salman Khan. Arbaz made his Bollywood debut with the film "Daraar" where he played the role of a Psychotic wife beater. Arbaaz Khan received the Filmfare Best Villain Award for his performance in this film. Since then he has appeared as supporting actor in a number of films such as "Pyar Kiya To Darna Kya", "Garv", "Hello Brother ", "Jeetenge Hum", "Maa Tujhhe Salaam", "Yeh Mohabbat Hai", "Tumko Na Bhool Paayenge", "Soch" etc. He once again played a negative role in the movie "Qyamat", which was successful at box office. Arbaz also acted in many Priyadarshan comedy films such as "Hulchul ", "Malamaal Weekly "and "Bhagam Bhag ". He played the role of a police officer in the multi-starrer "Shootout at Lokhandwala" and mobster in the film "Fool and Final ". He also appeared in the television serial "Karishma: A Miracle of Destiny" in 2003.