Get the information about Amrita Rao's profile and her film background by going through her biography.
Bollywood : Indian Film Actresses : Amrita Rao 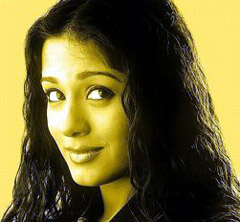 Mini Biography
Amrita Rao was born in a conservative Saraswat Brahmin family. Amrita Rao started her career in showbiz industry as a model and then graduated to acting in films. Her first assignment was for the "Fairever face cream". Since then Amrita Rao has appeared in more than thirty five advertisements. She was noticed by the film director Raj Kanwar in Cadbury's Perk advertisement and signed her for his movie "Ab Ke Baras". "Ab Ke Baras" did not do well at the Box Office but she was admired and appreciated for her performance. Her second film "Ishk Vishk "was a super hit. Amrita Rao won the Filmfare Best Debutant award for her performance in the movie "Ishk Vishk". Since then she never looked back and Amrita was offered variety of roles in the coming films. Her other hit movies are "Masti", "Main Hoon Na"& "Vivah". After that Amrita did a number of films but most of them could not make any impact at the Box Office. She has fiercely guarded her personal life. Here's a peep into the little known personal life of Amrita Rao.