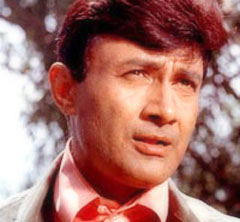 Mini Biography
Dev Anand was born at Gurdaspur in undivided Punjab to Pishorimal Anand (Advocate). After graduation, he left home and landed at Mumbai to fulfill his passion of acting in films. Devanand did job in the military censor office at Churchgate, Mumbai, for a salary of Rs. 160. Dev Anand was offered his first big break by his favorite actor Ashok Kumar in the film "Ziddi" opposite Kamini Kaushal. The film was successful and afterthat Dev Anand launched his own production company 'Navketan'. First film produced by him was crime thriller "Baazi", whiah was directed by his friend Guru Dutt. Lyricist Sahir Ludhianvi's song, 'Tadbeer se bigdi huyee taqdeer bana de', in the film proved prophetic and Dev Anand became a true star. His films "Rahee", "Aandhiyan" and "Taxi Driver" were super hit at box office.

A rapid-fire style of dialogue delivery, an array of hats and a penchant for nodding while speaking became Dev Anand's style in the films like "Munimji", "CID" and "Paying Guest". His style was lapped up by the audience and was widely imitated. His class act in the film "Kala Paani" won him Filmfare Best Actor Award. Devanand's first colour film "Guide", which was directed by his elder brother Vijay Anand, is regarded as his best work till date. He also tried his hand at film direction with the film "Hare Ram Hare Krishna" in which he introduced Zeenat Aman. The film was based on hippie culture.

Dev Anand is one of those few Indian actors/filmmakers who are politically aware and active and are ready to stand up for the cause that is dear to them. He led a group of film personalities who stood up against the Internal Emergency imposed by the then Prime Minister of India, Indira Gandhi. Most of his films are an expression of his world view and have dealt with socially relevant subjects