Aishwarya Rai is an Indian actress and model who first came to limelight when she won the Miss World title in 1994.
Bollywood: Indian Film Actresses: Aishwarya Rai 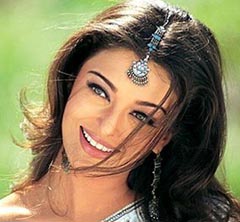 Aishwarya Rai is an Indian actress and model who first came to limelight when she won the Miss World title in 1994. The winner of several awards, including two Filmfare Awards, she has appeared in both Tamil and Hindi movies. Beginning her career in show business as a model, she went on to win the Miss World 1994 pageant. Soon she ventured into acting as well. She made her debut in a Tamil film and appeared in her first Hindi film soon afterward. Even though her initial films didn't do well at the box office, she persevered and was able to find success with the release of her Tamil film 'Jeans.' Since then, she has established herself as one of the most popular actresses in Indian cinema. Some of the top films of Aishwarya Rai's career are Jodhaa Akbar, Hum Dil De Chuke Sanam, Devdas, Guru and Taal.. Besides acting, she is also involved with numerous charity organizations. She is an international Goodwill Ambassador for the Joint United Nations Programme on AIDS (UNAIDS). She supports the Eye Bank Association of India and PETA India as well. She became the first Indian actress to be a jury member at the Cannes Film Festival in 2003. The Government of India honored her with the Padma Shri in 2009.

Early Life
Aishwarya Rai was born on 1 November 1973, in Mangaluru, Karnataka to Krishnaraj and Vrinda. Her father was an army biologist, while her mother is a homemaker. She is the younger of the couple's two children. Her brother, Aditya, is an engineer in the merchant navy. Her family moved to Mumbai when Aishwarya was a young girl.

She attended the Arya Vidya Mandir High School. As a teenager, she attended classes in classical dance and music. After initially considering a career in medicine, she changed her mind and enrolled at Rachana Sansad Academy of Architecture. However, she didn't complete her degree and dropped out to pursue a modeling career.

Early Career as a Model
Aishwarya Rai emerged the winner of an international supermodel contest (organized by Ford) in 1991. This gave her an opportunity to be featured in the American edition of 'Vogue.' Soon she got offers to appear in commercials and gained popularity for her appearance in a Pepsi advertisement that also featured actor Aamir Khan and Mahima Chaudhry. She participated in the 1994 Miss India pageant and was crowned Miss India World, in the second place behind Sushmita Sen, who was crowned Miss India Universe. She then went on to represent India in the Miss World Pageant 1994 and clinched the title. She was also named "Miss Photogenic" and "Miss World Continental Queen of Beauty - Asia and Oceania" at the pageant.

Film Career
Aishwarya Rai made her film debut in 1997 with dual roles in the Tamil film 'Iruvar,' directed by Mani Ratnam. While the film was critically appreciated, it was a commercial failure. The young actress' Hindi film debut, 'Aur Pyaar Ho Gaya,' a romantic comedy released the same year, was also a commercial failure. In 1998, she played the role of Madhumita in the Tamil romantic drama 'Jeans.' The film was a hit at the box office, and it gained her widespread popularity.

Aishwarya Rai starred in the romantic drama 'Hum Dil De Chuke Sanam' in 1999. Her portrayal of Nandini, a beautiful girl who is forced to separate from her lover and marry a man of her father's choice, was much appreciated. The commercially successful film marked a significant turning point in her career and won her a Filmfare Award for Best Actress. Her next film, 'Taal' (1999), in which she played an aspiring singer named Mansi, was also a commercial hit. In the ensuing years, she appeared in numerous films like 'Josh' (2000), 'Hamara Dil Aapke Paas Hai' (2000), and 'Hum Kisise Kum Nahin' (2002).

In 2002, she appeared in Sanjay Leela Bhansali's love-saga 'Devdas,' sharing the screen with superstar Shah Rukh Khan and Madhuri Dixit. She played Paro, the love interest of an arrogant, alcoholic man named Devdas. The film was a major international success and won many awards, including a Filmfare Best Actress award for Rai.

She garnered international recognition for her role in Gurinder Chadha's British film 'Bride and Prejudice' in 2004. The same year, she acted in the relationship drama 'Raincoat' that gained critical acclaim.

After a five-year break, Aishwarya Rai appeared in the drama-thriller 'Jazbaa' (2015), alongside Shabana Azmi and Irrfan Khan. The following year, she appeared in two films: 'Sarbjit' and 'Ae Dil Hai Mushkil.' In 2018, she starred with Anil Kapoor and Rajkumar Rao in the musical comedy film 'Fanney Khan.' As of mid-2020, she is set to star in the upcoming historical drama 'Ponniyin Selvan,' a Tamil film. Source

Social Work
Aishwarya Rai is actively involved with several charitable organizations and social causes. She is the brand ambassador for the Eye Bank Association of India and the Pulse Polio campaign. In 1994, she became the spokesperson for the International Year of Microcredit.

The actress launched the Aishwarya Rai Foundation to help underprivileged people in India in 2004. In 2005, she performed at the HELP! Telethon Concert, an event organized to raise money for the victims of the 2004 tsunami earthquake. She has been serving as a Goodwill Ambassador for the Joint United Nations Programme on AIDS (UNAIDS) since 2012.

Personal Life
Aishwarya Rai began a much-publicized relationship with Bollywood superstar Salman Khan in 1999. The couple broke up in 2002. It was reported that Salman Khan had abused her and cheated on her when they were still together. She then briefly dated actor Vivek Oberoi.

While shooting for the film 'Dhoom 2,' her co-star Abhishek Bachchan fell in love with her. They eventually started dating seriously. The couple's engagement was announced on 14 January 2007, and they got married on 20 April 2007, in a traditional Hindu ceremony. The couple celebrated the birth of their first child, a baby girl named Aaradhya, on 16 November 2011.