Get the information about Antara Mali's profile and her film background by going through her biography.
Bollywood : Indian Film Actresses : Antara Mali 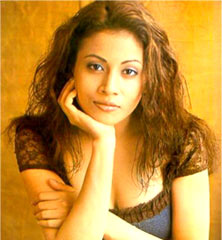 Mini Biography
Antara Mali is daughter of the renowned commercial photographer Jagdish Mali. Her grand father was a great painter. With such a strong legacy of art it was natural that she will do some sort of art and Antra decided in favour of acting in films. She made her debut in Bollywood in a low budget movie "Dhoondte Reh Jaaoge", which went unnoticed. Then came "Mast" and "Company" directed by Ram Gopal Verma and she became a recognizable face in Bollywood. Antra received a lot of appreciation for her work in "Main Madhuri Dixit Banna Chahti Hoon" opposite Rajpal Yadav. Her other popuar movies are "Road, Darna Mana Hai", all are directed by her mentor Ram Gopal Verma. Besides Hindi films, she has also acted in a Telugu movie "Prem Katha".