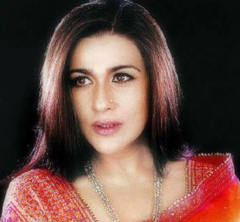 Mini Biography
Amrita Singh was born in a Sikh- Muslim family, her father Shivinder Singh was a Sikh and her mother Rukshana Sultana was a Muslim. Her father was an army officer and mother was political activist during emergency period. Amrita Singh is well versed in Hindi, English, and Punjabi languages. She made her debut in Bollywood with "Betab" opposite Sunny Deol. Thereafter, she gave many super hit films such as "Sunny", "Mard", "Saaheb", "Chameli Ki Shaadi", "Naam" and "Khudgarz". Amrita has portrayed different characters in her acting career. Amrita left her filmy career after marriage with Bollywood star Saif Ali Khan, son of the versatile Sharmila Tagore. The couple had two children a daughter named Sara and a son named Ibrahim. Due to personal differences, they got separated in 2004. After divorce Amrita returned back to acting and has given some great performance in "Shootout At Lokhandwala" and "Kalyug". She has also ventured in TV serials and currently working in the series "Kavyanjali".