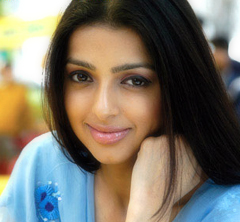 Mini Biography
Bhumika Chawla is the youngest daughter of her parents. She has an elder brother and an elder sister. Bhumika Chawla completed her schooling from Delhi and then shifted to Mumbai (Bombay) to pursue her acting career. She started her campaign in glamour world with" Ponds" talcum powder advertisement. Bhumika Chawla's charming smile in Ponds advertisement made her popular and she was noticed by film makers.

Her debut film was "Yuvakudu" (Telugu) but Bhumika Chawala got recognition as an actress through her second film "Khushi" (Telugu). Bhumika won best actress award for "Khushi". Since then she hasn't looked back and has done five films in Telugu and two in Tamil. Bhumika Chawala made her debut in Hindi films with" Tere Naam" opposite Salman Khan. She won Zee Cine Best New Comer (Female) Award for the film "Tere Naam". Her other recently released Hindi films are- "Run", "Dil Jo Bhi Kahey", "Family - Ties of Blood" and "Gandhi My Father". Bhumika Chawla tied the nuptial knot with her long time friend Bharat Thakur (Yoga guru) on 9th December 2007. The marriage was performed in a simple ceremony attended by close relatives and friends of Chawla and Thakur.