Know about Fardeen Khan's Profile and his background by going through his Biography.
Bollywood : Indian Film Actors : Fardeen Khan 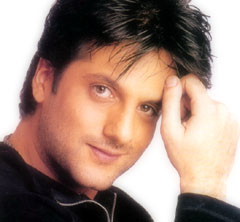 Mini Biography
Fardeen Khan was born to the famous actor and director Feroz Khan and Sundari Khan. He made his debut in the film industry with home production film "Prem Agan" along with another newcomer Meghna Kothari. Though the film bombed at box office yet Fardeen went on to win the Filmfare Best Debutant Award for his performance. For almost one year there were no offers to Fardeen khan but he didn't give up. Ram Gopal Verma spotted him at a party and offered him a role opposite Urmila Mantodkar in his movie "Jungle". This film was super hit and Fardin Khan was noticed by the film industry. This was followed by many films but all of them failed to do any magic at box office.

Fardeen Khan was appreciated for his role in the movies "Om Jai Jagdish" and "Khushi". Fardeen's other films like "Bhoot" and "Dev" did well and helped him to establish as an actor. Fardin's "No Entry" and "Hey Baby" also did well. Fardeen is married to Natasha Madhwani, daughter of former actress Mumtaz and business tycoon Mayur Madhwani.