Know about Hrithik Roshan's profile and his background by going through his Biography.
Bollywood : Indian Film Actors : Hrithik Roshan 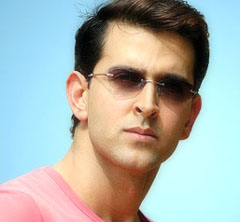 Mini Biography
Hrithik Roshan began his career as child artist in the movie "Asha", where he appeared in a dance sequence. He also appeared as child artist in few other films like "Aap Ke Deewane" and "Bhagwan Dada", where his father was in lead role. Before coming to films as an actor Hrithik Roshan assisted his father in the production of films "Karan Arjun" and Koyala".

Hritik Roshan made his debut as lead hero in his home production film "Kaho Na Pyar Hai" opposite another debutante actress Amisha Patel. His performance earned him the Filmfare Best Male Debut Award and Filmfare Best Actor Award. Next, Hrithik Roshan Starred in the critically acclaimed films "Fiza" and "Mission Kashmir" with mixed success at box office. Some of Ritik's films like "Mujhse Dosti Karoge", "Na Tum Jaano Na Hum" and "Aap Mujhe Achche Lagne Lage" did poorly at box office and his career looked in doldrums. He made comeback with successful science fiction film "Koi Mil Gaya". The film was highest grosser of the year and also won many Filmfare Awards including the Filmfare Best Actor Award. After taking two year break from acting, Hrithik resurfaced with the superhero film "Krrish" and rocked the box office once again. It was followed by Dhoom 2, which was also a blockbuster.