Get information about Divya Bharti's profile and her film background by going through her biography.
Bollywood : Indian Film Actresses : Divya Bharti 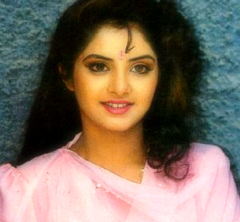 Mini Biography
Divya Bharti was born in Mumbai (Bombay) to Om Prakash and Meeta. She left college her mid-way and started acting in films. Her debut movie was "Bobilli Raja" in Telugu. The film "Bobilli Raja" was super hit at Telugu box office and it was dubbed into Hindi as "Rampur ka Raja". She went on to do five more Telugu films such as "Nila Penne", "Dharma Kshetram", "Tholi Mudhu", "Rowdy Alludu "and "Assembly Rowdy". Then Divya Bharti shifted to Bollywood and made her debut with "Vishwatma" in 1992. The film had average success at box office but Divya Bharti shot into fame with the song 'Saat Samundar Paar ……' in the movie "Vishwatma". Afterwards, Divya Bharati gave super hit film "Deewana" opposite Sharukh Khan and Rishi Kapoor. Thereafter Divya Bharati acted in 13 films amidst speculation that she is next Sridevi.

Divya Bharti fell in love with film producer Saajid Nadiadwala and married him secretly. But her life tragically came to an end when she fell from fifth floor of her flat in Yari Road, Versoa. The circumstances behind her death were considered suspicious by the media however police could not find any evidence to prove that it was murder. Two of Divya Bharti's films "Rang" and "Satranj" were released after her death.