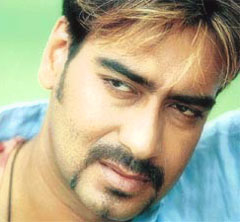 Mini Biography
Ajay Devgan is son of the famous stunt director Veeru Devgan. He made his debut in Bollywood as an action hero with "Phool Aur Kaante". Ajay Devgan went on to win Best Debutant Award for his performance in this film. Thereafter he appeared in a number of movies as action hero. Some of his notable action movies were "Vijaypath", "Jigar", "Sangram", "Ek Hi Rashta", "Dhanwaan", 'Nazayaj" etc. Ajay Devgan broke this trend after starring in the comedy film "Ishq". His next film "Pyar To Hona Hi Tha" was biggest hit of the year. Ajay Devgan's performance in the film "Zakhm", directed by Mahesh Bhatt was critically acclaimed and he won the National film Award for the Best Actor. He again won National Award for his performance in the film "The Legend Of Bhagat Singh", a film directed by Raj Kumar Santoshi.

Recently, Ajay starred in Ram Gopal verma's "Ram Gopal Varma Ki Aag", a remake of "Sholay", arguably the most popular film of Hindi cinema. The film was a major failure critically as well as commercially. After enacting various roles in his acting career, Ajay Devgun has donned the hat of Director for the film "U, Me Aur Hum" which is supposed to be produced by Kumar Mangat and his wife Kajol.