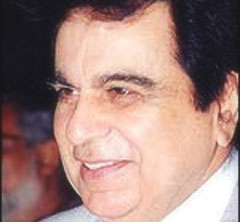 Mini Biography
Dilip Kumar was born at Qissa Khwani Bazaar in Peshawar (Pakistan). After partition Dileep Kumar shifted to Pune and started off with his family business of supplying dry fruits. He was spotted by famous actress of those years, Devika Rani, who was also wife of famous director and founder of Bombay Talkies, Himanshu Rai. Dilip Kumar got his first breakthrough in the film "Jwar Bhata" directed by Himanshu Rai but the film went unnoticed. He shot into fame with his first major hit film "Jugnu". In next movie "Andaz", Dilip Kumar co-starred with Raj Kapoor and the film was a huge success at box office and he became a star. Dilip Kumar is known for playing tragic roles in popular films such as "Deedar", "Amar", "Devdas" and "Madhumati". Since then he is known as "Tragedy King" in Bollywood. His historical film "Mughal- E- Azam" was highest grossing film in the history of Hindi cinema.

Dilip Kumar also entered in film production and his first produced film was "Ganga Jamuna" in which he co-starred with his real- life brother Nasir Khan. Despite the success of film "Ganga Jamuna" he did not produce any other film. After giving a number of successful movies like "Ram Aur Shyam", Kranti", Vidhaata", "Shakti", "Karma" and "Saudagar" Dilip Kumar retired from film industry in 2002.