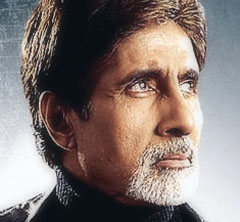 Mini Biography
Bolywood super star Amitabh Bachchan is son of the famous Hindi poet late Harivansh Rai Bachchan. He was born at Allahabad in Uttar Pradesh. After completing his studies from Sherwood College, Nainital and Kirori Mal College, Delhi University, he shifted to Kolkata to work in Shaw Wallace Company (a shipping firm). Later he moved to Mumbai to try his hand in Hindi film Industry.

Initial years of Amitabh Bachhan were full of struggle, as he was tall and of dark complexion, he could not match to the requirement of film directors as lover boy. Amitabh Bachchan Started his acting journey with the film "Saat Hindustani". He won his first National Film Award as Best Newcomer. Amitabh Bachchan gave his first hit film "Zanzeer" in 1973 with his real life love and future wife Jaya Bhaduri. This film established Amitabh in a new persona - the "angry young man" action hero of Bollywood. For the next one decade Amitabh gave almost one hit film every year that includes "Deewaar ", "Sholay ", "Trishul ", "Muqaddar Ka Sikander ", "Don ", "Kasme Vaade ", "Kaala Patthar ", "Mr. Natwarlal", "Ram Balram ", "Shaan ", "Lawaaris " and "Shakti ". Besides doing action films, Amitabh also did comic roles in "Chupke Chupke", "Amar Akbar Anthony" and "Namak Halal". As romantic hero he gave notable performance in the movies "Kabhie Kabhie" and "Silsila".

This great actor of Hindi film industry has got tremendous fan following across all age groups. Amitabh Bachhan was fatally injured while shooting for the film "coolie". His fans prayed for his early recovery and some of them even offered their one limb for his recovery. Nevertheless, Amitabh recovered soon and resumed shooting for the film. Later the film "coolie" was released and it was a big hit at box office.

Amitabh Bachchan took break from acting and entered politics with the support of his friend Late Rajiv Gandhi. He was elected Member of Parliament from Allahabad in 1984 but soon he realized that politics was not his cup of tea and he decided to quit. After returning to the film industry Amitabh turned towards production of films and established Amitabh Bachchan Corporation Ltd (ABCL) for production and distribution of films. Besides acting in films, Amitabh Bachchan has also hosted popular game show "Kaun Banega Karorpati" (KBC) on TV.