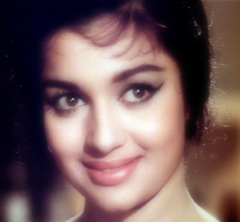 Mini Biography
Asha Parekh was born at Bangalore in a Gujrati family. She is commonly known as jubilee girl as most of her films celebrated Silver jubilee or Golden jubilee at box office. Asha Parekh started learning Indian classical dance at an early age. Jubilee girl made her debut in Bollywood as child artiste in the film "Aasmaan". Film director Bimal Roy saw her dance at a stage show and cast her in his film "Baap Beti". The film failed miserably at box office and Asha was disappointed to such an extent that after doing couple of more films as child artiste, she left the film line and resumed her schooling.

After completing her schooling, Asha again entered in Bollywood and made her debut as lead actress in Vijay Bhatt's film "Goonj Uthi Shehnai" but she had to leave this film midway in favour of actress Ameeta as the filmmaker did not consider her as star material. The very next day she was signed by writer-director Nasir Hussain for his film "Dil Deke Dekho" opposite Shammi kapoor and the film proved super-duper hit at box office and made her a huge star. Thereafter, there was a long and fruitful association with Hussain. He went on to cast her as lead heroine in some more films like "Jab Pyar Kisi Se Hota Hai", "Teesri Manzil", "Baharon Ke Sapne", "Pyar Ka Mausam", "Caravan" etc". Aasha Parekh also did cameo role in the film "Manzil Manzil".

Asha Parekh was primarily known as glamour girl until director Raj Khosla gave her a serious image role in his film "Do Badan". After that director Shamanta Kumar gave her more dramatic roles in his films "Paagal Kahin Kaa" and "Kati Patang"; the latter earned her the Filmfare best actress award. After a long successful career in films she quit acting in 1995. In the 1990s, she also ventured in production and direction of TV serials.