Get the information about Amisha Patel's profile and her film background by going through her biography.
Bollywood : Indian Film Actresses : Amisha Patel 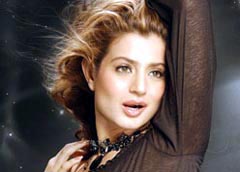 Mini Biography
Amisha Patel is the grand daughter of famous lawyer and former justice Rajni patel. The name Amisha is a combination of Amisha Patel's parent's name, Amit & Asha. She has an elder brother named Asmit Patel, who is also a film actor. After graduation she worked for a finance company and did occasional modeling. Ameesha returned back to India and joined Satyadev Dubey's theatre and started acting in plays. She was spotted by Rakesh Roshan in a family party and signed her for "Kaho Na Pyar Hai" opposite his son, Hrithik Roshan. The film was the biggest blockbuster of the year and Amisha became a star overnight. After "Kaho Na Pyar Hai", Amesha did many films and all of them were unsuccessful at the Box Office except "Gadar: Ek Prem Katha". "Gadar" was a super hit film and gave new boost to her acting career. She won many awards for her performance in Gadar. Besides acting in Hindi movies Amisha Patel also did four Telugu movies. Her recent released film is" Bhool Bhoolaiya". Amisha Patel has recently signed a new film, directed by Kunal Kohli, which will also star Saif Ali Khan and Rani Mukherjee.