Know about Arjun Rampal's profile and his film career by going through his Biography.
Bollywood : Indian Film Actors : Arjun Rampal 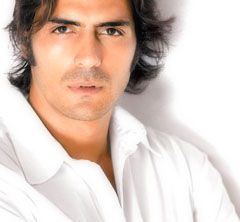 Mini Biography
Arjun Rampal made his debut in Bollywood with the film "Moksha". His next film was "Pyar Ishq Aur Mohabbat". None of these films did well at box office but his performance was noticed. Since his debut, Arjun Rampal has worked steadily in films such as "Aankhen", "Dil Hai Tumhaara ", "Yakeen " and "Ek Ajnabee ". Before coming to Bollywood, Arjun Rampal was a famous Model. He was discovered in a discotheque of Delhi by the famous designer Rohit Bal.

Rajiv Rai cast Arjun Rampal in a music video 'Don't Marry' with model Namrata Baruwah and he also signed him for his film "Pyaar, Ishq Aur Mohabbat" with Keerti Reddy, Suniel Shetty and Aftab Shivdasani. Arjun Rampal has also ventured into film production; Arjun has set up his own production company 'Chasing Ganesha Films'. His first produced film was "I See You", which received poor reviews and failed at the box office. Arjun Rampal is married to the famous model Mehr Jesia and has two daughters named Mahikaa and Myra.