Read about Jaaved Jaffrey's profile and his film background by going through his Biography.
Bollywood : Indian Film Actors : Javed Jaffrey 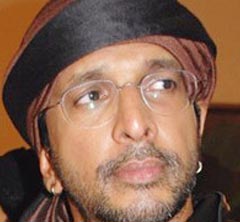 Mini Biography
Javed Jaffrey was born in Mumbai to Syed Jawaher Ali Jaffrey. He made his Boillywood debut in the film "Meri Jung" where he played a negative role. Javed did show his dancing prowess in the role he played but got forgotten in movies. Jaaved Jaffrey played various roles in Hindi Movies but none of the movies were big hit. He won his first IIFA award for best comic role in Salaam Namaste in 2006.

Javed Jaffery is known for his comedy and his comic prowess came to the fore via Television with the launch of cable TV, particularly MTV. He is famous for his Maggi tomato ketchup advertisements. He is also popular as tapori for his portrayals of Bombay hoodlums.

His dubbed commentary has been used in the famous Japanese TV show, "Takeshi's Castle" on Pogo TV. He also hosts the dance competition show Boogie Woogie on Sony Entertainment Television Asia with his brother, Naved Jaffery and friend Ravi Behl.