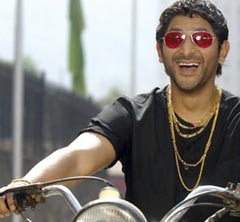 Mini Biography
Arshad Warsi debuted with the Amitabh Bachchan's first production film "Tere Mere Sapne" along with Chandracur Singh. "Tere Mere Sapne" did average business at box office and several offers followed. Arshad did a number of films after "Tere Mere Sapne" but most of them bombed at the box office. Then came "Munnabhai M. B. B. S.", which proved to be a mile stone in his career and made him famous as circuit. Since then he has worked in several successful films such as "Maine Pyaar Kyun Kiya", "Salaam Namaste", "Golmaal" and "Lage Raho Munnabhai"- the sequel to Munnabhai M.B.B.S... Arsad Warsi went on to win Filmfare Best Comedian Award for his performance in the film "Lage Raho Munnabhai".

Arshad Waarsi has made a mark for himself on the small screen as well. He hosted a popular award show 'Sabse Favourite Kaun' for Star Gold channel. He was also the host of 'Bigg Boss' the Indian version of the British reality TV series Big Brother on Sony Entertainment Television.