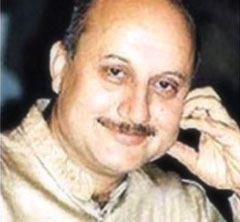 Mini Biography
Anupam Kher was born at Shimla in Himachal Pradesh. After graduation, Anupam Kher took admission in National School of Drama (N S D) at Delhi and honed his acting skills there. He passed out from N S D in 1978 and acted in theatre for a few years. Anupam Ker made his debut in films with "Aapman". His next film was "Saaransh", in which he played a late- aged person having lost his son. He won the Filmfare Best Actor Award for his performance in the film "Saaransh". Since then Anupam Kher had appeared in more than two hundred films. He has mainly done comic roles but he was applauded for his role as Dr Dan in "Karma". Anupam Kher's next film "Dady" won him Filmfare Critics Award for Best Performance.

Anupam Kher has also hosted T V shows such as 'Say Na Something To Anupam Uncle' and 'Sawaal Dus Crore Ka'. He also ventured into film direction with the film "Om Jai Jagadish", which failed at the Box Office. He also produced and starred in the film "Maine Gandhi Ko Nahin Mara" and won the Best Actor Award from the Karachi International Film Festival for his performance in the film. Anupam Kher has also done some international films like "Bend It Like Beckham", "Bride and Prejudice and "The Mistress Of Spices". Recently, Anupam Ker has started a new production company (Karol Bagh Production Company) with his batchmate of N S D, Satish Kaushik. The first film of this company "Tere Sang" is being directed by Satish Kaushik.