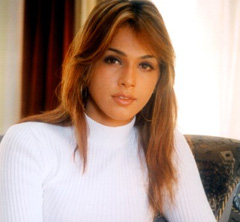 Mini Biography
Isha Koppikar was born in Mumbai (Bombay), India. While she was in college, she did a model shoot for Gautam Rajadhayksha. Isha Koppikar was crowned Miss Talent in 1995 at Femina Miss India Contest. She then modeled for L'Oreal, Rexona, Camay, Tips & Toes and Coca-Cola. Isha made her debut with "Kaadhal Kavidai" in Tamil film Industry. Isha Kopikar was won critical acclaim for her performance in the film and went on to win Filmfare Best Actress Debut Award (Tamil). Her next movie"En Swasa Katre" opposite Arvind Swamy was also in Tamil. The film was a musical hit and a good grosser at the box office. Then Isha Kopikkar played a cameo role in the film "Jodi" as a prospective bride.

Isha Kopikar did some minor roles in Bollywood films like "Fiza" and "Pyaar Ishq Aur Mohabbat" but she shot into fame with an item dance in the film "Company" directed by Ram Gopal Verma. Isha Koppikar was nicknamed "Khallas Girl" after that item dance on the song "Khallas". Isha Koppikar was nominated for the Filmfare Best Villain Award for her negative role in the film "Qayamat: City Under Threat". Her next film was "Girlfriend", in which Isha played a role of lesbian woman. Isha Koppikar will be seen in a lead role in the film "Sabri" directed by Ram Gopal Verma. The film is about a woman who is set to become Mumbai's first underworld lord.